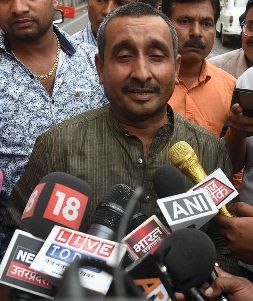 Why Is The BJP Supporting Rape-Accused Kuldeep Sengar?

Why Is The BJP Supporting Rape-Accused Kuldeep Sengar?

It is really shameful that the BJP first chose to dilly-dally when the question of expelling Kuldeep Sengar, the party's MLA from Bangermau in UP and the prime accused in the Unnao rape case, came up after the 'accident' in which the victim was nearly killed. The party's stated position was that he had already been expelled. If that was true, then why was a fresh expulsion order issued on Thursday after the entire opposition and civil society united to demand it? Sengar should have been expelled the day he was arrested, if not the day the girl accused him of rape. But such things cannot be expected from an administration that refused to act on an FIR till the victim and her mother attempted self-immolation in front of chief minister Yogi Adityanath's house, causing a national outrage.

The BJP stands accused of providing political support for more than two years to a person accused of raping a minor. This has happened despite the party's government at the centre having amended the POSCO act to provide for the death penalty for child rapists. Why this double standard? That too, for someone like Sengar who is a known turncoat and does not rank very high in the party hierarchy in the state? It defied logic that the party stood behind him all these days, even after he was jailed in April 2018. Doesn't the party know that putting people in jail is not the end of the story? People like Sengar get all facilities in jail and it takes just a phone call from them to activate their henchmen who then let loose a reign of terror on the victim and her family.

The party's support meant that Sengar, his brothers Atul and Manoj and their henchmen could terrorize the victim and her family at will. They even used policemen to issue veiled threats like "withdraw the case, or else you know what will happen". The girl's father was beaten to death in custody after being arrested, allegedly in a fake case. Now, an 'accident' was staged to kill the victim. The administration did nothing to alleviate the sufferings of the victim and her family. The BJP has a lot to answer for in this case.