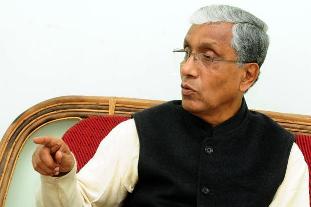 Why Manik Sarkar's Speech Was Not Allowed

Why Manik Sarkar's Speech Was Not Allowed

Editor-in-Chief of indiacommentary.com. Current Affairs analyst and political commentator. View all posts by this Author
Was it right on part of the Prasar Bharti, the holding company that manages AIR and Doordarshan to refuse to air Tripura chief minister Manik Sarkars Independence Day speech?

There are two ways to look at it. The first is to go by the excuse Prasar Bharti gave in rejecting to air the speech in its original form  that it was politically charged and did not adhere to unstated pricnicples upholding the sanctity of the day. If you read the speech, you will get an idea that Sarkar went into a diatribe against the policies of the Central government and accused it of creating divisions in the country. It included a supercharged paragraph on cow protectors. Manik Sarkar has the right to air his views on any subject that catches his fancy, but a second reading of the speech gives the impression that it was written to be read out at an election rally and not to address the people of the state on a solemn occasion like Independence Day.

The second is to go by the logic that since it was a speech on Independence Day, is it not pertinent that Sarkar should choose to warn the people of the state about divisive politics that could seriously impact the independence they are enjoying? Celebrating Independence Day is incomplete without focusing on things that keep us independent or things that might threaten the same in future. In that sense, Sarkar was not wrong in warning the people against people sowing seeds of mistrust among communities. But did he not overdo it? A major part of his speech was devoted to ranting against rightist forces. Obviously, a Leftist will rant against rightists but there has to be a time and place for it. A popularly elected leader of a state is not expected to indulge in such lengthy rants in his or her Independence Day speech.

That brings us to the obvious question about how correct it is to allow bureaucrats to censor the speech of an elected chief minister and then decide whether it should be aired or not? Is it Prasar Bhartis domain to allow the airing of certain views and restrict others? Will it only allow views that sound good to the ears of the ruling dispensation? Or will it be fair and allow all kinds of views to be aired and let the public decide which is correct? It is easy to accuse Prasar Bharti of playing favourites. But when one considers that it was an Independence Day speech, one feels that the mandarins in the body were right in not allowing Sarkars speech, which was for major part a disguised rant against all things CPM considers abhorrent and a party political statement.