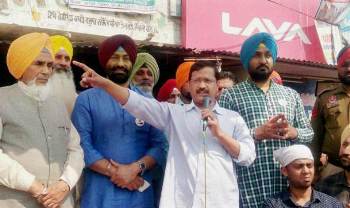 Editor-in-Chief of indiacommentary.com. Current Affairs analyst and political commentator. Writes for a number of publications. View all posts by this Author
A comment from Manish Sisodia, senior AAP leader and de facto number two in the party after Arvind Kejriwal, has fueled the possibility that Kejriwal might himself become the chief minister of Punjab if the party wins there.

While addressing a public meeting in Mohali near Chandigarh, Sisodia told the crowd to vote for AAP as when you are voting, think that you are voting to make Arvind Kejriwal chief minister. It is seen an oblique peek into the strategy of AAP by most observers.

Opposition parties were quick to seize on this in a different manner. Capt. Amrinder Singh of Congress, who had called Kejriwal a sneaky little fellow in an interview some days ago, repeated the phrase today and added that Kejriwals nefarious ambitions have come out after months of beating around the bush. Akali Dals Sukhbir Singh Badal took it as an affront to the Punjabis by tweeting that by asking people to vote for Arvind Kejriwal as Chief Minister of Punjab, Manish Sisodia has exposed their plan. AAP has proven it does not trust Punjabis. AAP dismissed the conjectures by saying that if the BJP asks for votes in Modis name in UP, does it mean that Modi will become CM of UP if the party wins. But AAP is forgetting that the BJP never says that by voting for the party people can think they are voting to make Modi the CM.

If AAP wins and Arvind Kejriwal does assume the mantle of chief minister in Punjab, he will be making the biggest mistake of his short political career. In one stroke, he will become a villain in Delhi without becoming a hero in Punjab, where he will always remain an outsider. He will also reinforce his image of being a bhagoda or a person who runs away from things, leaving them incomplete. People will start asking whether he will leave Punjab to become the CM of the next state AAP might manage to win.

AAPs dilemma is there for all to see. It simply does not have a local candidate of stature to take on either Badal or Amrinder Singh. That is why the party invested so much time and effort in trying to lure Navjot Singh Sidhu to its fold. Since that did not materialize, the party has been left high and dry as it did not have a Plan B. With things heating up now, the early advantage that AAP seemed to have garnered in Punjab is fast vanishing. It is going to be a fight between the Congress and the BJP-Akali combine and the scales are currently tilted in favour of the Congress. AAP can at best hope to have a sizeable presence in the state assembly or hope to play kingmaker in case a hung verdict is returned.