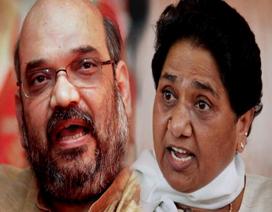 Editor-in-Chief of indiacommentary.com. Current Affairs analyst and political commentator. Writes for a number of publications. View all posts by this Author
Have Amit Shahs machinations in UP Rajya Sabha elections backfired? He worked overtime and assiduously to ensure that the BSP candidate lost in order to drive a wedge in the budding Babua-Bua bonhomie that was threatening the carefully built citadel of the BJP in UP. But Mayawatis statement yesterday will definitely depress Shah and have him scurrying to draft a Plan B.

Mayawati said that the BJP must be thinking that Mayawati is hot-headed and will break the alliance, but at no cost will I let the BJP's plan succeed. Obviously, it is common knowledge that the BJP pulled out all stops to snatch the 10th seat in UP. More than the seat itself, it was an effort to prove to Mayawati that an alliance with Akhilesh and SP will yield nothing for her. But it seems Mayawati is not fully convinced.

She has seen through BJPs game. She knows that legislators from her party and from SP too were influenced to ensure her defeat. But she has her ear to the ground. She knows that given the popular mood among the backward classes, an alliance with SP will work in her favour. She has gauged the mood among her followers that perceives the Yogi Adityanath government as one of the upper castes. She has got feedback that they will not balk at an alliance with the SP in order to clip the wings of the BJP. As of now, Mayawati has her back to the wall. Her huge following is not resulting in electoral benefits for her. Having made a successful experiment in Phulpur and Gorakhpur, Mayawati is likely to continue the alliance for long term benefits.

On the other hand, though Amit Shah is renowned for his tactical machinations, this one doesnt seem to be working. He has to work on another plan to thwart this alliance. For, he knows that if the committed vote banks of two regional parties come together, there is little chance for the BJP to repeat, or even come close to, its awesome performance in the 2014 general elections. He also knows that without a strong showing in UP, it will be very difficult to retain power in 2019. So, expect more fireworks from his arsenal in coming days. He might just catch on to another thing Mayawati said. She said she expected SP to make all sacrifices to make sure her candidate won. This can mean that she wanted SP to even sacrifice Jaya Bachchan if push came to shove. Shah is smart enough not to miss this veiled rebuke Mayawati has issued to Akhilesh.