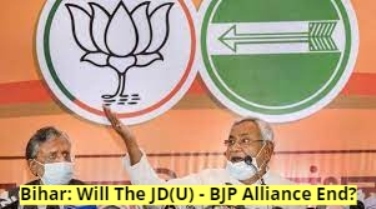 Will Nitish Kumar Walk Out Of The Alliance With The BJP?

Will Nitish Kumar Walk Out Of The Alliance With The BJP?

If one were to use the two-liners used during elections in Bihar, the latest tiff between the alliance partners - the JD(U) and the BJP - can be best summed up as "RCP Singh to bahana hai, JD(U) ko bus jaana hai". The JD(U), it seems, has made up its mind to leave the alliance with the BJP. Hence, it is using former Union minister RCP Singh's exit as an excuse and saying that the BJP is trying to repeat the Chirag model once again. But the party has always perceived Singh as Amit Shah's man and that is why it did not extend his Rajya Sabha term which forced him to resign from the Union cabinet.

JD(U) chief Lalan Singh had yesterday said that RCP Singh's exit had shades of the conspiracy the BJP allegedly hatched in 2020 assembly elections by using Chirag Paswan as a result of which the JD(U) seats went down drastically. The party has taken it as an affront and has launched an all out attack on the BJP. The relations between the two alliance partners, already on the edge for the last couple of months, have now reportedly inched towards the point of no return.

Nitish Kumar is reportedly so miffed with the BJP, more so after the way it split the Shiv Sena, that he is wary of an Operation Lotus in Bihar. He knows that as of now, he has enough numbers to leave the alliance with the BJP and form another one with Tejasvi Yadav's RJD and the Congress. Their combined strength will give them a majority. But if the BJP manages to split the JD(U), the numbers will go down and it will not be possible for him to remain chief minister.

That is why Nitish has called a meeting of all his party legislators on Tuesday and he is expected to announce his next step. Kumar knows that to keep the flock together, he needs to have majority and remain in government. The lure of office is the best carrot to keep MLAs together. If he has had back channel talks with the RJD and the Congress (which he must have otherwise he would not have been so belligerent), Kumar will most likely end his alliance with the BJP tomorrow.