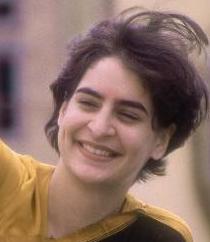 Will Priyanka Smile Her Way To Varanasi?

Will Priyanka Smile Her Way To Varanasi?

Editor-in-Chief of indiacommentary.com. Current Affairs analyst and political commentator. Writes for a number of publications. View all posts by this Author
The latest list of candidates released by the Congress did not name anyone for Varanasi, leading people to speculate whether it is going to field Priyanka Vadra against Prime Minister Modi. The buzz about Priyanka fighting the elections from Varanasi has been there ever since she replied to questions from Congress workers asking her about whether she was actually going to be a candidate in these elections. She had then playfully asked why she shouldnt stand from Varanasi. Since the polling date in Varanasi is May 19, the last phase of the elections, it makes sense as by then she would have completed her campaigning in other constituencies.

But will it really be effective? Some in the Congress are of the opinion that if Priyanka is fielded from there, Modi would be forced to give more time in the constituency. They say that it would be a good way of preventing him from campaigning at other places. But they forget that it is part of his strategy to camp in his constituency for the last few days. He did it in 2014. He might do the same this time too. In 2014, his presence in eastern UP for the last few days had paid rich dividends. That must be at the back of the mind of both Modi and Shah. They might, in any case, want him to be present in Varanasi for at least three days in the end, including the polling day. That would take away the biggest reason of fielding Priyanka from there.

Otherwise too, if the gathbandhan also fields its candidate in Varanasi, it would be disastrous for Priyanka to fight from there except for making a point. Given the acrimony that exists between Mayawati and the Congress, the alliance is unlikely to leave the seat for the Congress even if it chooses to field Priyanka. The decision of the alliance will also be guided by the fact that the Congress got just 10% votes in 2009 (before Modi came), while the combined vote share of SP-BSP then was 46.5%, although they had fought against each other. Although there are hundreds of candidates in the field in Varanasi, the main fight will be between Modi and the alliance candidate. If Congress fields Priyanka, the fight would become three-cornered and opposition votes will again be divided. It is not as if Modi is facing any threat. In 2014, Arvind Kejriwal of AAP secured second place with just over 20% vote share. The Congress, SP and BSP had a combined vote share of 17.5%. Modi had won with 56.37 percent vote share. If there is a direct fight between Modi and the alliance candidate, Modi might not be able to repeat his huge victory margin. But if Priyanka is fielded, a division of opposition votes would benefit Modi.

In any case, the Congress does not have a history or tradition of fielding family members against famous opposition leaders. If and when anyone from the family decides to contest, the whole party is galvanized into finding a safe seat for her or him. But with safe seats now becoming scarce (even Amethi is no longer considered safe), it is upon the Congress to decide whether it wants to make a point by fielding Priyanka in Varanasi. But knowing how the party high command works, one thinks that delaying the naming of the candidate is just a ploy to keep both the BJP and the alliance on tenterhooks. The party will either nominate old warhorse Ajai Rai from there or leave it for the alliance to engage Modi in a direct fight. It is unlikely to field Priyanka Vadra.