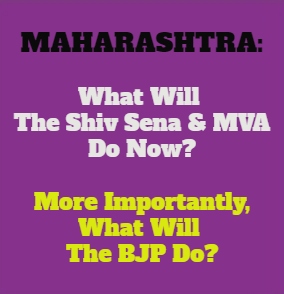 Will The MVA Recommend Dissolution Of Assembly?

Will The MVA Recommend Dissolution Of Assembly?

The MVA government and the Shiv Sena are in emergency mode in Maharashtra. After yesterday's developments when several Sena MLAs under Eknath Shinde's leadership rebelled and went to Surat and after no understanding was reached with the rebels even though Sena emissaries reached out to Shinde and Uddhav Thackeray had a conversation with him over telephone, this morning saw Sena leader Sanjay Raut tweet about the likely dissolution of the state assembly. His other tweets also gave an indication that the Shiv Sena and the MVA were prepared for the worst.

Today saw a cabinet meeting chaired by chief minister Uddhav Thackeray (who also tested Covid positive amid the ongoing crisis) to take stock of the situation and decide on strategy, although a minister later told the media that only cabinet issues were discussed. Thackeray is slated to meet with party leaders in the evening. Although the MVA has faced many difficulties earlier too, this is the biggest crisis in its 30-month history as the Sena rebels are showing no signs of relenting. A hint of the brewing crisis was available when BJP managed to win extra seats in both the Rajya Sabha and state legislative council polls recently. It was then clear that some MVA MLAs were letting BJP candidates win by cross voting in favour of its candidates.

If the BJP garners the support of 134 MLAs (as it has claimed, although it has only 106 MLAs in the house) and tries to form the government, it can also hope to get the support of the smaller parties and independents, numbering 13 (excluding the two MLAs of SP). Then it will have 147 MLAs and a majority in the 288 member house. That is why the Sena is hinting at the MVA recommending the dissolution of the house. But it remains to be seen what the Governor does when the Cabinet recommends such an action. Things can take a different turn if the BJP stakes claim before that and produces a list of the supporting MLAs or moves a no-confidence motion against the MVA government.