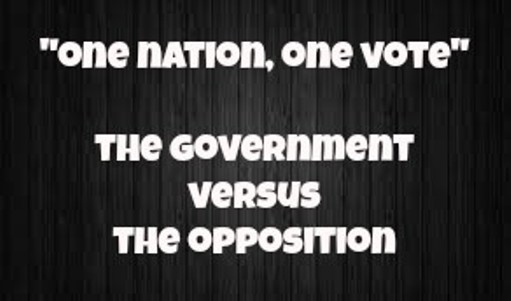 Working Together: Onus On Government To Allay Opposition Fears

Working Together: Onus On Government To Allay Opposition Fears

The Prime Minister held a meeting today in which he had invited all opposition parties which had at least one member in either house of the Parliament. The meeting was called to discuss the idea of one nation, one vote or holding simultaneous elections to the Lok Sabha and the state assemblies and to discuss how the nation should celebrate the 75th anniversary of Indian Independence in 2022 and the 150th birth anniversary of Mahatma Gandhi on October 2 this year.

The prime minister had said in Parliament that the small presence of the opposition in Parliament will not mean that the government will ignore them. He had said that every word of theirs would count. He said that any democracy needed active and effective opposition. In that spirit, he had convened the all-party meeting to discuss the above subjects.

Hence, as a party which has got a massive mandate from the people, it is the duty of the BJP and Prime Minister Modi to allay these fears with confidence-boosting measures. The first such measure should be publishing a white paper on the idea of one nation, one vote, as suggested by West Bengal chief minister Mamata Banerjee. Before discussing in detail, the opposition must be made aware of what possibilities the government is thinking about and how it plans to go about it. The white paper will let the opposition know what the government has in mind and will give them an opportunity to prepare their responses. It would be a huge confidence booster for faith in the government and what it says.

The opposition has almost been marginalized in these elections. But the nation should not be run without consensus on several critical issues. Otherwise too, the objections of the opposition must always be heard and recorded on each and every issue. The government, with its brute majority, has a greater responsibility in ensuring that this is done. Since its record in its first term does not inspire much confidence in the opposition, the onus is now on Prime Minister Modi to bring them on board by allaying their fears. Only then will it be a responsible government.

As for the opposition, they will have to constructive and positive in their views. Opposing just for the sake of opposition has just nuisance value and does not help in building the nation. The government must be held accountable for its every action and the opposition has a huge role to play in this. Sulking or looking the other way will not help. The opposition parties need to coordinate well and play the role of a watchdog in Parliament and outside it too. Only then will they help democracy and validate the trust of the voters.