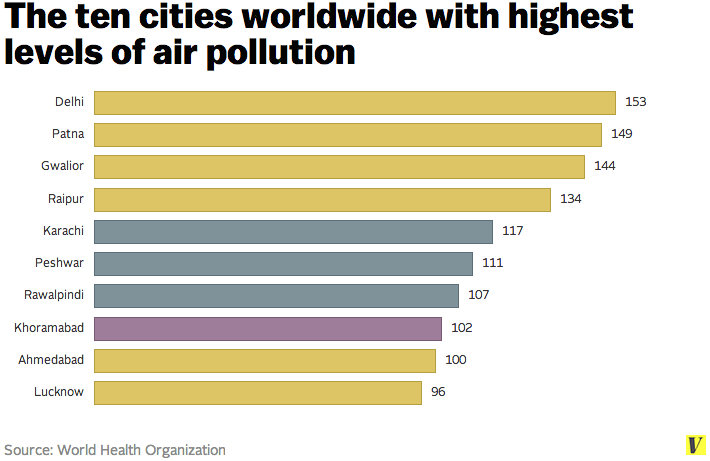 Worsening Air Pollution in India: What Should we do?

Worsening Air Pollution in India: What Should we do?

Editor-in-Chief of indiacommentary.com. Current Affairs analyst and political commentator. Writes for a number of publications. View all posts by this Author
The quality of air we breathe daily in our cities has deteriorated so much that six Indian cities have made the worst ten cities of the world in air pollution. This is a shameful statistic that shortens the lives of all of us living in these cities and bodes ill for our future generations. Lung, skin and eye infections are on the rise and symptoms leading to asthma are being commonly seen in even children as young as 6 or 7 years. Doctors are alarmed that after a decade, these children would be scared to venture out on the roads, lest they fall sick.

The WHO report says that while China, which was more affected than India even a decade back and used to top the air pollution list, has managed to clean up its act somewhat, it is now India that is doing nothing to arrest the slide. Delhi with 153 mg suspended particle matter per cubic metre of air is notorious for being the worst city in terms of air quality. Mumbai, Kolkata and Bengaluru are not far behind. Just a few decades back, Bengaluru was known as the garden city. Now it is becoming increasingly difficult to live there. While air quality in Delhi has worsened by 47% in 13 years, that in Beijing has improved by 40% during this time.

But the government, in a cavalier display of disdain, has termed the media analysis of these reports and the general highlighting of the air pollution problem as a conspiracy. Who is conspiring against whom? IsnÃ¢â¬â ¢t the government conspiring with auto makers to give them a free hand to sell their luxury cars with venom spewing diesel engines? Is there any justification for cars with price tags of Rs 35 lakh to be run on subsidized fuel? The glut of such private cars and luxury SUVs (also being run as luxury taxis) on the roads in the last few years has exacerbated the problem of worsening air quality. For letting undeserving people save a few thousand rupees each month on their fuel bill, we are playing with the lives of our current and future generations.

The government has closed its eyes to the problem almost as if it will go away on its own. There are many ways suggested by experts that can reduce air pollution. The first, of course, is the decision of not allowing private vehicles and commercial luxury taxis to be run on diesel. Then, in cities, we can have the policy of allowing cars with number plates ending in odd numbers on one day and even numbers on next day (this was tried in London and Paris with varying degree of success). We can even restrict the entry of cars in areas where pollution is worst (this is being done in a limited way in some Indian cities, but more because of shortage of parking space that due to worsening air pollution).

Another good way to reduce air pollution is to encourage car pools. Somehow, in India, car pooling has assumed socially negative overtones. If you initiate a car pool, people immediately start saying that maybe you do not have money to pay for fuel. Further, people feel power in driving alone to work. It is only when they have to get up at odd hours Ã¢â¬" like dropping children to school, for instance Ã¢â¬" that car pooling is not a problem. This attitude has to change.

The government has to be prodded into doing its bit. Auto companies should not be allowed to market diesel variants of high end cars. The reduction of diesel subsidy has to be fast tracked. But we also have to be proactive. Every adult member in affluent households wants a car of his own Ã¢â¬" if it is a diesel SUV, it is better. Even if two members are going to the same vicinity, they will take different cars Ã¢â¬" there is aversion to sharing. So how will they share cars with neighbours? Here one is not talking about the Mukesh Ambani household. This happens in most apartment buildings in most cities. This will have to change. Buy cars, but run them only when necessary. Go on joy rides Ã¢â¬" but share. Use car pools as much as possible. Help in reducing air pollution Ã¢â¬" the health of your children and that of the nation depends on it.