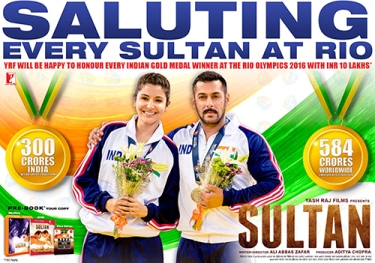 Yash Raj Reward for Every Sultan at Rio

Yash Raj Reward for Every Sultan at Rio

By our team of in-house writers. View all posts by this Author
Yash Raj Films (YRF) made Sultan with Salman Khan and Anushka Sharma. It was about a wrestler winning gold for the country. It was about egos and sacrifices and love but it was also about the grit and hard work that goes into the making of a champion. The film made over Rs 584 cr worldwide. Now YRF is paying back. It has announced a reward of Rs 10 lakh for every sports person who wins a gold medal for India at Rio. They wrote:

YRF, Indias premier film production house walks the talk. YRF did not only make an entertaining film Sultan about a struggling athlete but is also coming forward to reward our Indian athletes at the Rio Olympics 2016. YRF has announced to honour Indian athletes competing in Rio with 10L cash reward if they win a gold for the country. This is what we call reel reaches out in real - one just doesn't make a film on an underdog athlete but also extends it in the most genuine way to encourage the true Sultans and Aarfas at Rio. To win it for their country. To win it for themselves. Saluting every SULTAN at Rio! Every small gesture goes a long way.

India Commentary welcomes this move by YRF and salutes them.