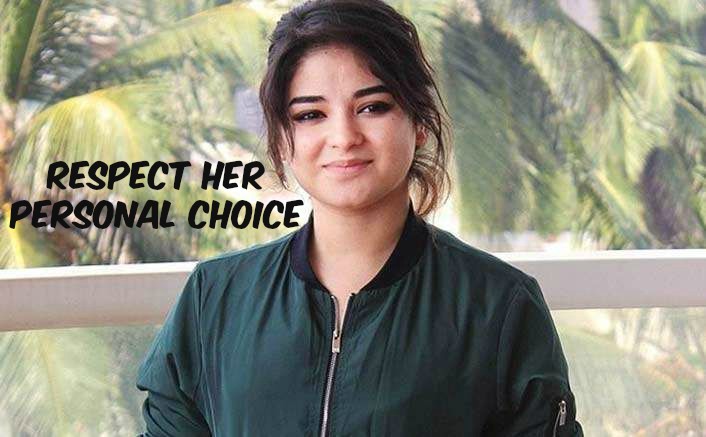 Zaira Wasim, the kid who starred in Amir Khanâs Dangal has grown up. At just over 18 years of age, her inner self has made her see things about faith and divinity which some see very late in life and others do not see at all. Zaira has given up acting as she said that it interfered with her religion. It is her inner voice and purely her personal choice and it should be respected. No one has the right to ascribe motives or allege outside influence for her decision. In the past, Vinod Khanna had temporarily quit films (for a very long period, though) to follow his heart and be with his guru, Acharya Rajneesh, or Osho as he is now called by his followers.

One must acknowledge that it takes huge mental composure to be part of the glitz and glamour associated with Bollywood. Many women and even men have been known to have not been able to handle the pressure and have fallen apart. Zaira was just 13 when she started acting in Dangal and 16 when it was released, following which she won many awards and became famous. Right from her first film, she has been subjected to public scrutiny (as any actor would be) but mostly because of her religion. When she cropped her hair for the role of a wrestler in her debut film, people criticized her for being un-Islamic. She had also complained about a fellow passenger trying to molest her in a flight. Even then, the issue had taken a communal turn with some people trying to support the accused. It is not surprising that the confused and hurt girl could have retreated in a shell and reflected on whatever was happening with her. It is not always necessary for a pundit, maulavi or bishop to tell us what is right and what is wrong. Our inner voice, propelled by our imaan, can do it for us.

If Zaira has had that awakening, she is surely blessed. If she says that she discovered that she did fit in Bollywood but felt that she did not belong there, we should not be judgmental but accept, and respect, her personal choice.