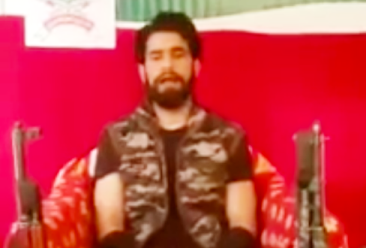 Holding an extreme view and carting the ball out of the park is what interests him most. He is a hard hitter at all times. Fasten your seatbelts and read. View all posts by this Author
With Zakir Rashid Bhat or Zakir Musa, the replacement of Burhan Wani as the commander of Hizbul Mujahideen, exhorting people of Kashmir to pelt stones and worse for Islam and not only for the Kashmir cause, the carefully placed veil that the Kashmir disturbances were for the independence of the state has been brutally lifted. With this, one hopes that Left-liberal supporters of Kashmiri extremists will see reason, but knowing them, one is sure they will not. Now they will start saying that one mans opinion does not count and the majority of Kashmiris are not extremists but freedom fighters. Also, that India is brutally crushing human rights in Kashmir.

Maybe, initially, the Kashmiris fought for independence from both Pakistan and India for Kashmiriyat and to have an independent Kashmir. But as Pakistani army and the ISI entered the fray, it was no longer about Kashmir. The youth was radicalized, mostly in Kashmir but sometimes by slipping them to the other side of the border. They were provided with money and resources. Then, it became Pakistan versus India and what better way to provoke Muslim youth against India than raising the banner of Islam.

Kashmiri youth today is fascinated with the larger than life images of the likes of Burhan Wani and Zakir Musa. Youth everywhere is rebellious and does not want to toe the official line. The rebellion can be against such harmless things as curfew hours in hostels or it can be for things which they do not understand but have been brainwashed into believing. Like Burhan Wani is a freedom fighter, for instance. There are no good or bad terrorists. Zakir Musa has proved that in his video.

But if the natural youth instinct to rebel is craftily channelized in a particular direction by adding religion, then it becomes a powerful and dangerous Molotov cocktail. Then, youngsters as young as 13/14 years pelt stones at the Indian army to prevent security operations against known killers as they think the forces are killing those who are working for Islam. They themselves become killers and saboteurs by following the same religious logic. This is what has happened in Kashmir and Zakir Musa wants to perpetuate it.