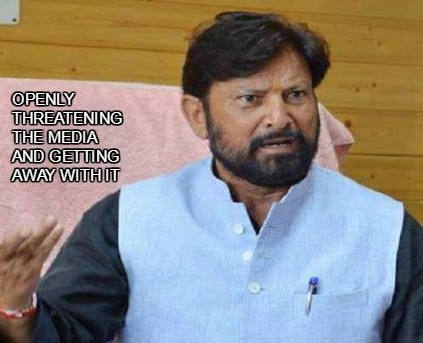 Editor-in-Chief of indiacommentary.com. Current Affairs analyst and political commentator. Writes for a number of publications. View all posts by this Author
How can a legislator issue such open threats to the media and escape censure? Choudhary Lal Singhs chilling warning to journalists working in the Kashmir valley is part of a larger design where politicians  elected and even petty local ones  cannot digest the truth and want the media to report on issues is a way that is favourable to the ruling party. There are reports that bad news is being blacked out in Tamil Nadu. This discomfort with truth runs across party lines and no politician worth his salt is able to digest truthful reporting. But Singhs warning was a brazen attempt to browbeat the media into submission and cannot be tolerated.

The least the BJP could do was to verify his remarks and suspend him immediately. By not doing so, the party has unwittingly  or maybe knowingly  sent a signal that unfavourable reporting, even if it presents the truth before the readers, will not be tolerated. This is a dangerous trend. Journalists in Kashmir are working under constant threats. They are doing a wonderful job of being impartial and sending true reports from the ground. Some amount of personal bias may creep in at times but that is true of most reporting. That does not mean that they are twisting facts or targeting the BJP or the central government.

With J&K under governors rule now and the security forces having been given unlimited powers, it is all the more necessary to have a free and fearless press report on operations. For, unfortunately, there are some in the security forces who transgress their boundaries and indulge in excesses. The presence of media and the fear of exposure will keep a check on these elements. In these troubled times in the state, it is needed that the media is allowed to work efficiently and fearlessly. Hence, the BJP should immediately suspend Choudhary Lal Singh from primary membership of the party and issue an official statement that threats to the media will not be tolerated.