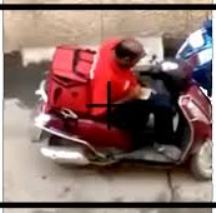 Zomato: Eating Food And Delivering It Too

Zomato: Eating Food And Delivering It Too

By our team of in-house writers. View all posts by this Author
People are talking about how a Zomato food delivery man stopped midway to partake food from a packet he was to deliver.

It reminds us of a humorous story we had heard. A child was manning a grocery shop in the absence of his father. A customer who came to buy some essentials was intrigued by how the child could resist the temptation of not eating all the goodies displayed, especially as no one was watching. He asked the child about it. The child replied, with all innocence, that he took out the lozenges, sucked on them for some time, put them back in the wrapper and replaced them in the jar.

The delivery person perhaps thought no one would be wiser if he ate some portion of the food from each of the packets. But he had not reckoned with the omnipresent cctv cameras at most places nowadays. His act was caught on camera and has resulted in him being dismissed.

Although Zomato has said that it will now introduce tamper-proof packaging (as we are sure most other food delivery companies will also do), people are not convinced and are saying that they will now think twice before ordering food online. People are scared of the consequences of having bacteria-infected food delivered to them by a person who might have scooped some portion with dirty hands or exposed it to contaminated air on the roads. They are also worried about getting lesser portions than what they paid for.

This is a very serious issue that will take some time to get resolved. It will obviously result in business dipping in the festive season of Christmas and New Year. But people feel that the convenience of getting food delivered, especially for working professionals, will make people forget the incident in a few months. People are saying that not all delivery persons are like that.