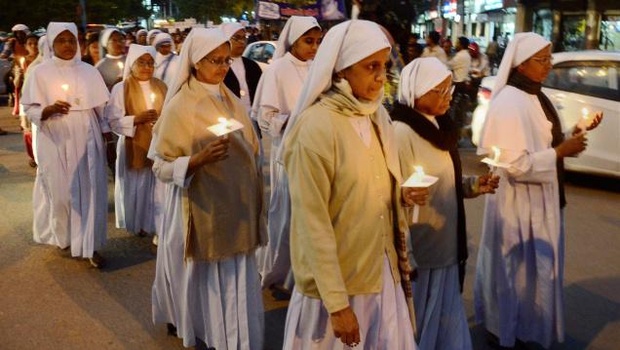 A Nun Raped: Where are our Social Values?

A Nun Raped: Where are our Social Values?

Editor-in-Chief of indiacommentary.com. Current Affairs analyst and political commentator. Writes for a number of publications. View all posts by this Author
Headline: A 73 year old nun gang raped in Ranaghat, West Bengal during a dacoity in a Catholic school.

Headline: Nirbhaya rapist Mukesh claims girls bring rape upon themselves. Says it was not his fault that he raped her. Even denies raping her.

Readers must be getting the irony evident in the above three headlines.

A demented rapist who, along with his friends, raped, tortured and murdered a young girl and the khap panchayats Ã¢â¬" supposed custodians of social values Ã¢â¬" are one in thinking that provocatively dressed girls, or girls who stay out late with their male friends, are fit to be raped.

But was the 73 year old nun provocatively dressed? Was she roaming the streets with a male friend in the dead of night?

Let us for a moment forget about the minority angle. Let us forget that the raped woman was a Christian and that she was a nun. (For, all evidence points to the fact that this was not a communal crime, not that its ugliness is reduced by this in any way). Let us think that the gruesome crime was committed on an ordinary, faceless 73 old citizen of India. What kind of men are out there in our country that go around raping women old enough to be their grandmothers? There are others who do the same to two and three year olds? Then they, and their ilk, have the temerity to put the blame on girls. Ã¢â¬ÅBoys will be boysÃ¢â¬Â - but with 73 year olds? Or, with two and three year olds?

This is the kind of sick mentality that is the result of treating women like chattel in a patriarchal society. Village choupals have no place for women. All decisions are taken by men. A girl is prevented from using a mobile phone because she can communicate with her lover. But isnÃ¢â¬â ¢t the person on the receiving phone a male? So how is the girlsÃ¢â¬â ¢ crime more than his?

In West Bengal in particular, the gradual degrading of social values in the last thirty years have meant that a state which prided itself in treating its women better than others in the country has now stooped to a level where even 73 years olds are not spared. Gone are the days when the Bengali was a gentleman, a bhadralok. Now, even educated people in the state cannot complete a sentence without using the Bengali equivalent of a four letter word. Kolkata was safe for women. Not anymore, despite a survey by India Today that puts the city as the safest. The rape of Suzzete Jordan in Park Street was initially dismissed as a sajano ghotona or conspiracy by the administration. Hence, even as the lumpen elements give the state a bad name, the government closes its eyes and sees conspiracy by opposing political parties in all criminal acts that happen in the state.

The Christian community is right in being aggrieved at the state of affairs. There has definitely been an uptrend in attacks on the community and its worship places after the NDA came to power. But West Bengal has always been hospitable to Christian missionaries and they have shaped future generations by providing quality education through their numerous schools in the state. It is a matter of concern that the administration has not been able to nab the culprits till now. That it has agreed to handover the case to the CBI is good. The agency should work with urgency to nab the perpetrators.