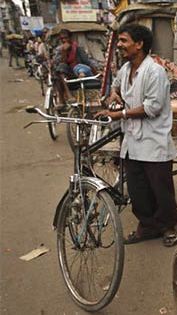 Anukriti is a student who dabbles in writing when she finds time. View all posts by this Author
An incident happened in Kolkata yesterday that shows how necessary and urgent it is to verify the credentials of those running public transport in the unorganized sector, like rickshaw-pullers, van-pullers and three wheeler drivers. There has been a spate of incidents in Kolkata where those who run these vehicles have habitually abused, molested and hit passengers and general public. The administration and the police have many checks in place for those who run registered public transport like buses, cabs or app cabs. But the unorganized sector runs more than five times the vehicles that they run and the credentials of the persons plying these vehicles are not registered anywhere. This, and the backing of their respective unions, emboldens them to do much as they please on the roads, holding the people and the administration to ransom.

In the latest incident, a young girl took a rickshaw in Kolkatas posh Salt Lake area. According to her estimate, the fare should have been Rs 30 but the puller demanded Rs 40. An argument ensued but the girl and her friends paid up what was demanded. They later tried to leave the area in an app cab, but by that time the rickshaw-puller arrived with several friends and blocked the way. The girl was made to apologize and touch his feet as reprimand for disputing the amount. She was even molested by the group of people. No one helped her on the busy street. She was shocked and traumatized.

There is an urgent need to keep a detailed register of those who ply vehicles in the unorganized sector. With e-rickshaws joining the fleet, their numbers have increased substantially. They must be issued photo-identity cards, either by the union or the police, which they must hang around their necks. Another card must be displayed prominently inside the vehicles, like in cabs. The public must be advised to click a picture of the card on their mobiles before boarding the vehicle. This will serve a dual purpose: on one hand it will perhaps prevent the driver from misbehaving and on the other hand it will help the police in identifying the offender if something happens. Although the police arrested the gang of rickshaw-pullers who tormented the girl, they got bail in court. Now, such is the power of their union that they will harass the girl and her family and will force them to withdraw the case. The unions must be told in no uncertain terms that misbehaviour with public will not be tolerated. The administration must work out a different way of putting a leash on these unruly elements.