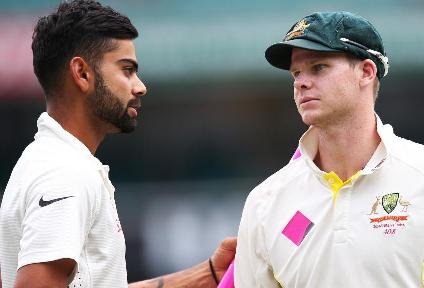 Editor-in-Chief of indiacommentary.com. Current Affairs analyst and political commentator. Writes for a number of publications. View all posts by this Author
True to form, the Australians have started mind games much before they land in India in February 2017 to play a 4-Test series. Steve Smith, the Aussie captain, has said that they will try to make Virat Kohli angry to gain an upper hand. While Smith is entitled to his devious ways, Australian mind games will not work for two reasons. One, Virat Kohli is no longer the impetuous, temperamental and brash youngster Smith still thinks he is  captaincy and stellar performances have given Kohlis confidence a major boost and he now refrains from doing things that might take his concentration away from the task at hand. The proof of this was his nonchalant reaction to James Andersons disparaging remarks during the recently concluded series with England. In a team comprising of youngsters, Kohli suddenly finds himself vaulted into the role of the elder statesman and much against his earlier nature, he is carrying it out with elan. He is unlikely to be cowed down or tempted by Aussie sledging in a manner that will affect his game or captaincy. Further, backed by the youngsters in his team, Kohli can be expected to give back with interest what the Aussies throw at him.

Two, this Indian team is no longer just about Kohli. Youngsters like K L Rahul, Cheteshwar Pujara and Karun Nair have won their spurs in spectacular fashion in the England series. Ravichandran Ashwin and Ravindra Jadeja brought the Englishmen to their knees and will do likewise with the Aussies as this will be the weakest team from that country to visit India. Although Ajinkye Rahane was off-colour and lost his place during the England series, his class will make him bounce back soon. The Aussies will find this Indian team a handful and their sledging is going to fail in the face of consistent performance from the Indians, who will reply with the bat and the ball instead of words.

Apart from Steve Smith, David Warner and Usman Khawaja (though he has never toured India and failed in his two trips to Sri Lanka) in batting and Mitchell Starc in bowling, there are few known performers in the Australian team in Indian conditions. Further, if the present composition of the team is any indication, a lot of players will be touring India for the first time. None of them is expected to stand up to the guiles of the Indian spinners, who are on a new high after demolishing the Englishmen. Below par performances from Smith and Warner can see Australia gasping for breath. Australian mind games notwithstanding, it is very likely that they will suffer a whitewash. Smith will do well to seek performances from his teammates rather than indulge in silly and outdated mind games.