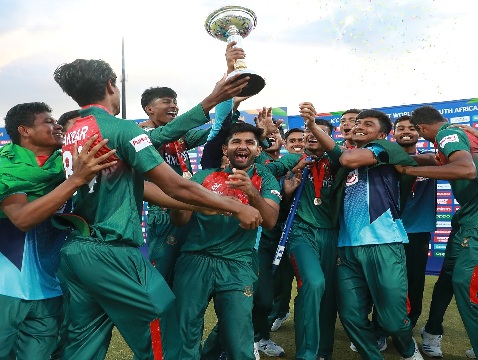 Bangladesh needs to be congratulated for the manner in which they put it across India in the final of the Under-19 World Cup. India was unbeaten and had defeated all opponents in the tournament by displaying absolute command over all three departments of the game. Their batsmen, especially the top order, were in fine nick, the bowlers were consistently dismissing the opposition and the fielders were putting in that extra effort that is needed to support the bowlers. It appeared a complete unit and was performing above par. Although Bangladesh too had displayed excellent form to reach the finals, India was the team to beat.

While the match was closely fought, the Indians lost the plot by allowing the Bangladeshi bowlers to dominate. No Indian batsman, including the superb Yasashvi Jaiswal (who had a stupendous tournament with 5 fifties, including a century in 6 matches), could get going fluently. While the Bangladeshi bowlers were commendable in the way they tightened the screws, it was beyond comprehension why the Indians could not convert ones into twos and why they did not rotate the strike more often. The pitch was difficult to play on as the ball was not coming on to the bat but the batsman should have realized that putting pressure on the fielding side by running twos instead of ones is the best way to make them make mistakes. The team collapsed after Jaiswal was dismissed and lost the last seven wickets for just 21 runs. India ended with 177, which was never going to be enough in a final.

Bangladesh started well and was cruising along at 50 without loss before leg spinner Ravi Bishnoi produced a devastating spell to reduce them to 65 for 4. But the Indians could not tighten the grip due to two factors: untidy bowling and fielding lapses. India gave away 33 extras. Defending a score of just 177, it was criminal to do so. Then, too many catches were dropped and the Bangladeshi batsmen were allowed to get extra runs by fielders who were slow to react. Finally, when Akbar Ali and Rakibul Hassan were taking Bangladesh home by craftily eschewing the fancy stuff, the Indians seemed to have run out of ideas. Priyam Garg, for once, led the side without much imagination or enthusiasm and let things slip out of his hand to give Bangladesh a comprehensive and well-deserved victory.