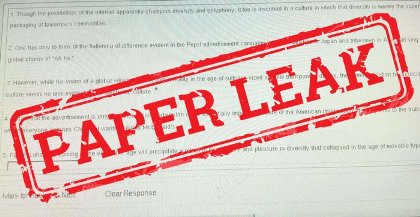 Editor-in-Chief of indiacommentary.com. Current Affairs analyst and political commentator. Writes for a number of publications. View all posts by this Author
It is a matter of deep concern that the test papers of CBSE were leaked before the exams. The economics paper of Class XII and the mathematics paper of Class X were posted in Whatsapp groups. The person or the gang who leaked the papers even had the temerity to send the maths paper to the office of the CBSE chairperson, Anita Karwal, on Tuesday evening. The exam was held on Wednesday. The Prime Minister was livid and spoke to HRD minister Prakash Javadekar, expressing his unhappiness and demanded strict action. The CBSE has announced that an all-India retest will be held soon. This has caused anger and resentment among the lakhs of students who took the tests. They accuse CBSE of mismanagement and causing them stress for no fault of theirs.

It is true the CBSE made a blunder this year by not printing different papers for Delhi and the rest of India. An overwhelming percentage of CBSE examinees are from Delhi and it is clear the papers were leaked from Delhi. The head of a coaching centre is being alleged to be the kingpin of the gang that leaked the papers. If there were separate papers then students outside Delhi would have been spared the trauma. It is very difficult for students to give a retest as it is held when they have been traumatized by the leak and after having already written the first paper.

Although the CBSE has a good system of setting the papers, does all that needs to be done to make them different for different regions (like changing the sequence of the questions, for example) and takes good precaution for transport and storage till the papers reach the exam centres in sealed packets, it is now confirmed that there is a leak (or maybe several leaks) in the whole process. While the Delhi police will conduct their investigations and nab the culprits, the CBSE should also conduct a separate investigation to spot deficiencies in the system.

But at the root of the problem are people who can be bought. India suffers from endemic corruption at the lower levels and starting from professors who set the papers to anyone in the chairpersons office to people in the printing press to people who put the papers in envelopes and seal them and others who handle them during transport or storage can be expected to leak the papers for a few thousands or lakhs, depending upon their station in life. It is stupid to blame the government for the leak. Having said that, the HRD ministry, under whose watch the CBSE falls, must ensure that the system is made more robust and foolproof so that future leaks are prevented.