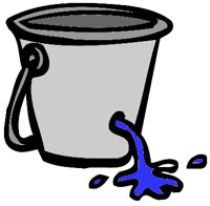 There's A Hole In The Bucket

There's A Hole In The Bucket

Editor-in-Chief of indiacommentary.com. Current Affairs analyst and political commentator. Writes for a number of publications. View all posts by this Author
Prime Minister Narendra Modi, speaking before NRIs, recounted what former Prime Minister Rajiv Gandhi had said about only 15 percent of the money sent for development or welfare schemes from Delhi reaching the poor. Although Modi used this to point out that successive Congress governments looted the country and give rise to crony capitalism with the then Prime Minister even admitting it, this is something which has always existed, even during the times of the rajas and zamindars. Two anecdotes show how it works.

Emperor Akbar was once very worried about reports that not all money collected from the people as taxes was reaching the treasury. As usual, he called upon Birbal to find out the reason. After a few days, Birbal asked Akbar to summon the full court. Once the court assembled, Birbal asked the guards to bring a big slab of ice and place it at the entrance. When Akbar asked him the reason, Birbal told him to just watch as it will answer his question. Birbal then asked the guards to pass on the slab to the first courtier and asked each courtier to relay it to the person sitting next to him. As the slab made its journey, it got reduced in size. Finally, when it reached the royal throne, it was almost half in size. Birbal explained to the Emperor that a similar thing happened with the taxes. Although this is the opposite of what Rajiv Gandhi had said, if we reverse the journey of the ice slab, it will show that only half of what Akbar allotted for the poor reached them.

In a different anecdote, a few village sarpanches in Rajasthan once petitioned a block development officer for a rainwater pond. The officer caught on that they were angling for funds, not the pond. A deal was struck: the officer had the funds sanctioned, the booty was shared all around and files and maps recorded that the pond existed. Two years later, the officer needed money in a jiffy. He asked the sarpanches to submit a petition urging the government to fill up the pond as its water had been contaminated. Once again funds were sanctioned and ex-gratia payments made to the victims. The loot was again shared. For every big scam, a hundred such incidents take place, draining Indias resources but not adding to its infrastructure.

Direct subsidy transfer (DST), Jan Dhan accounts and Aadhar enrolments have gone a long way in reducing this leakage and have ensured that most of the money reaches the real beneficiaries. Previously, the beneficiary list used to contain fake names and the money was paid in cash citing lack of bank accounts of the beneficiary. Most of this money was siphoned off. The troika of DST, Jan Dhan accounts and Aadhar has put a stop to this. This is not to say that leakages have vanished, but they have been reduced and the government has been able to save a lot of money in the bargain. Scamsters devise newer ways to siphon out development funds and the government has to be on its toes to prevent this.