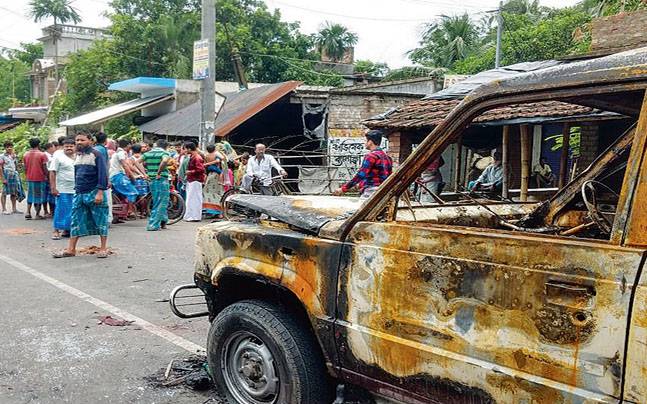 Editor-in-Chief of indiacommentary.com. Current Affairs analyst and political commentator. Writes for a number of publications. View all posts by this Author
What is happening in Bashirhat, about 100 kilometres away from Kolkata in West Bengal, is shameful and dangerous. After the Muslim community took exception to a post about Prophet Mohammed on Facebook, things went out of hand and both communities indulged in arson, looting and rioting. Claims and counter claims abound about who attacked first, who suffered more and why things went out of hand. The role of the local MLA, former footballer Dibyendu Biswas of the TMC, the local administration and the police has been questioned. Biswas has been summoned by the TMC brass to Kolkata to answer about his alleged involvement in allowing musclemen from one community to target people from the other. The police have been alleged to have favoured one community. The TMC has alleged that local and national BJP leaders made provocative statements that inflamed passions in the area. This is certainly not the way things should have been handled.

When the defamatory Facebook post surfaced, the police and the administration should have anticipated a flare-up. They should have called local Muslim leaders and made it known to them that they were taking all steps mandated by the IT Act and IPC to bring the offender to book. They should have also pressed upon them the futility of organizing local street protests about something that did not have local connotations. Simultaneously, they should have called local Hindu leaders to tell them about Muslim grievances and the need to assuage feelings. But nothing of the sort happened. Rowdies in both communities were given a free hand and things went from bad to worse within a short span of time. Neighbours living in harmony for decades turned enemies for no reason at all.

Mamata Banerjees government has a good record of maintaining communal peace. But first Howrah and now Bashirhat have raised questions about the intentions of the administration. As the BJP jostles to gain political space in the state, the large Muslim community feels its political importance will be reduced. At such a time, the TMC feels that it should side with the community. But this move is backfiring as more and more people think it is a policy of appeasement. Of course it will work to BJPs favour as it wants to consolidate the Hindu vote in the state. Didi has a tough job on her hands as she needs to keep her Muslim vote bank intact without further alienating the Hindus. But this communal politics is eating at the vitals of Bengal.