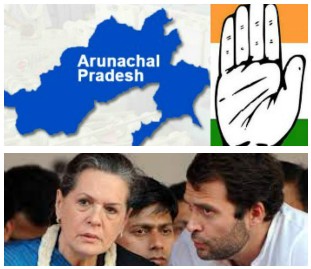 Congress Has No Time For Arunachal or Northeast

Congress Has No Time For Arunachal or Northeast

Editor-in-Chief of indiacommentary.com. Current Affairs analyst and political commentator. Writes for a number of publications. View all posts by this Author
In a dramatic turn of events, all but one Congress MLAs in Arunachal Pradesh have defected to the Peoples Party of Arunachal (PPA). That means the government installed by a Supreme Court order has fallen within months. Ironically, the only MLA who chose to remain with the Congress was Nabam Tuki, the chief minister before the original round of defections in December last year. Pema Khandu, the young CM who was installed in July, 2016 after the Supreme Court said that the governor J P Rajkhowas action in dismissing the earlier Nabam Tuki government was unconstitutional, led the defections. He repeated the earlier rebel charge that the party high command was unresponsive to them.

The Congress party has been so engrossed in Modi-bashing and has so focused its energies on mainland states that it has completely ignored its traditional bastions in the North-East. Except Sikkim, the Congress had held complete sway over the north-eastern states. It has now lost Assam to the BJP, Arunachal to defections and there are rumblings in all other states, with Manipur seemingly ready to go the Arunachal way. Of course the Congress will point fingers at the BJP and the newly constituted Northeast Democratic Alliance (NEDA) for engineering unrest among its ranks. With the wily Himanta Biswa Sarma as convenor of NEDA, this could be a possibility. But the real problem lies with the party and its high command.

The northeastern states count for little in political mathematics. Together, they have just 25 Lok Sabha and 14 Rajya Sabha representatives. Hence, the marginalized Congress and its leaders do not have time for peoples representatives from these states. They are not concerned about footprints or sensitive territories or traditional bastions. They are more concerned about getting or retaining the numbers, either alone (which increasingly seems a distant possibility) or by striking strategic alliances (like the one in Bihar) to embarrass the NDA government in the Rajya Sabha. They do not realize that every MP counts and those from its traditions strongholds in the northeast are now worth their weights in gold.

Congress leaders from the northeast have increasingly reported that neither Sonia nor Rahul have the time to meet them to discuss their problems. They are not given appointments for months on end and even on the appointed day, are made to wait for hours before being summoned in for a brief audience where nothing fruitful is discussed. If they defect to other parties after this, it is not their fault. The Congress has also allowed the BJP to increase its footprint to the northeast by following such policies. This writer had argued in an earlier article that although governor Rajkhowas actions in Arunachal were unconstitutional, the original crisis was precipitated by the wrong policies of the Congress high command. The recent defections have proved this right.