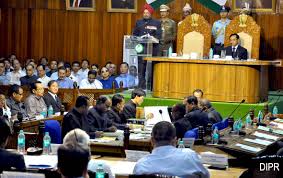 Crisis in Arunachal as Resolution Passed for Speaker's Removal

Crisis in Arunachal as Resolution Passed for Speaker's Removal

By our team of in-house writers. View all posts by this Author
A constitutional crisis has emerged in Arunachal Pradesh. 33 MLAs, including 20 Congress dissidents, out of the House strength of 60, passed a resolution for the removal of the State Legislative Assembly Speaker Nabam Rebia. Before this, an impeachment notice was given against the Speaker on November 19th. Subsequently, the Speaker had disqualified 14 Congress MLAs. The Governor had stepped in to direct the Deputy Speaker, Tenzing Norbu Thonduk, to conduct the dayâs proceedings. The Congress chief minister Nabam Tuki and the rest of 26 MLAs had not attended the session. Tuki later called the action a mockery of democracy. The AICC has deplored the governorâs action.

Two things emerge from this. Was the Speaker, against whom an impeachment motion was pending, competent enough to disqualify the 14 dissident Congress MLAs? Further, was the Governor constitutionally correct in asking the Deputy Speaker to conduct the session where the Speaker was âremoved?â

Charges and counter charges are flying. While the Congress and the chief minister have called the assembly session illegal and questioned the constitutional validity of 14 disqualified MLAs voting for the Speakerâs removal, the BJP on the other hand has questioned the constitutional validity of the Speaker disqualifying MLAs even though an impeachment motion was pending against him. The Speaker, Nabam Rebia said that he was competent to disqualify the MLAs as the motion was not moved.

Obviously, the Governor thought otherwise. In the fitness of things, if an impeachment motion notice is given against a Speaker, he should not take such important decisions as disqualifying MLAs till the motion is moved and defeated. For, in disqualifying them, he is seen to have removed 14 such persons who would have voted in favour of the motion. Is this correct? While constitutional pundits will debate over this issue, no one can sit on judgment in his own case and neither can anyone remove persons who are likely to vote against him after an impeachment notice has been served.

As for the Governorâs role, what was he to do if he found that the some ruling party MLAâs were not supporting their own party and there was no urgency on the part of the ruling dispensation to move impeachment motion? A notice for an impeachment motion is a serious matter and it cannot be left pending for nearly a month. The Congress should first set its own house in order before pointing fingers at others.