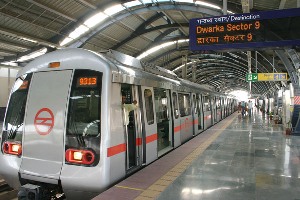 Editor-in-Chief of indiacommentary.com. Current Affairs analyst and political commentator. Writes for a number of publications. View all posts by this Author
The Delhi Metro is one of the best in the country, well maintained and with a wide network. It provides commuters a safe, pollution-free and fast option to travel from one point to another across the NCR. It has been made possible by balancing the ticket prices in such a way that it neither bleeds the Metro nor pinches the commuter. In other places, Kolkata for example, where the ticket prices have been kept artificially low, the quality of service has declined  rakes have not been replaced, there are no amenities like toilets and most ticket counters do not open even during peak hours leading to huge queues. Hence, the Delhi Metro reviews ticket prices periodically in order to maintain its efficient service. It has now decided to effect an across the board increase in ticket prices by Rs 5 per stage.

But the Arvind Kejriwal government in Delhi has asked the Metro to keep it on hold. Terming the price rise anti-people, Kejriwal has said that here is no need to raise the ticket prices. How fast some people learn! Arvind Kejriwal has started speaking the tongue of the people whose company he now keeps. But he should remember that Delhi is not Kolkata. People in Delhi have never resorted to burning trams and buses when ticket prices have been raised realistically. Instead, people, even in Kolkata nowadays, are more concerned about the quality of service than a small rise in ticket price. Many people resent the 25 year old rakes that still ply on Kolkata Metro. But if the Metro finds that it has to provide huge subsidy to maintain current services, with no hope of increase in revenue, it will not invest in new infrastructure.

What Kejriwal is attempting in Delhi  forcing ticket prices to remain low  will push the Delhi Metro downhill. He must realize that the Metro is not in the business of making monopolistic profits at the cost of the commuter. It just wants to provide efficient service to the people of Delhi at rates that do not pinch. A public survey to this effect will prove that Kejriwal is just trying to be populist. Most people will not resent a small price hike if it is to provide better services or even to maintain the level of current services. It is only political leaders like Kejriwal who are bent upon harming public utilities by forcing authorities to subsidize them heavily.