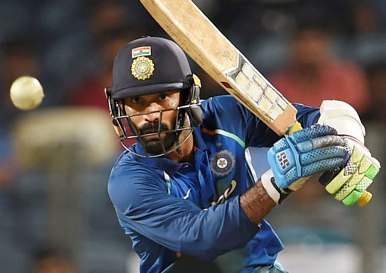 Editor-in-Chief of indiacommentary.com. Current Affairs analyst and political commentator. Writes for a number of publications. View all posts by this Author
It was the best played 8-balls cameo (although it went on to become the lead innings) one has ever seen. India were reeling at 133/5, still needing 34 runs off the remaining 12 deliveries when Dinesh Karthik got the opportunity to bat. At the other end was Vijay Shankar who was under tremendous pressure as he was just scratching around in his first international innings in the face of some disciplined bowling by Bangladesh on a pitch that was getting decidedly slower.

But Karthik had other plans. He hit the first ball he faced soaring over the bowlers back to the fence for a six by converting an attempted yorker into a full toss. The next ball was dispatched beyond mid-ons reach for a four. The next ball was lifted high over the mid-wicket fence for another six. The equation suddenly became an eminently gettable 18 off 9. The Bangladeshis went into a huddle, not knowing what hit them. Karthik missed the next ball, a juicy good length outside the off-stump. The next ball yielded two runs straight down the ground. Finally, the last ball of the 19th over was expertly scooped to long leg in uncharted territory for another four. That left 12 to get from the last over, with Karthik on an unbelievable 22 off 6 balls.

The last over began with Vijay Shankar facing Soumya Sarkar. Off the very first ball, which was a wide, Dinesh Karthik was almost run out, adding to the intense drama. It meant India got an extra ball. Shankar missed the next ball. Off the second ball, he took a single, angrily stopping Karthik from taking a second. Karthik could only play the third ball to cover for a disappointing single. The fourth ball saw Shankar playing a tentative shot which still yielded a four at point. Shankar attempted heroics off the penultimate ball but ended up lofting it high at mid-off. Two fielders almost made a mess of it before one of them managed to catch it. The good thing was that the batsmen crossed over, leaving Karthik at the batting end with 5 needed off 1.

Even as the bowler started his run-up, the Indian camp was tense. Spectators all around the ground were waiting with bated breath. Sarkar bowled a good length ball on the off stump. Karthik made room and hit it in the air but extremely flat over cover. The ball carried over the fence for an amazing six to give India a rousing win. It was one of the few times that India managed to snatch victory from the jaws of defeat.

The gallant Bangladeshis, who had restricted India till the 18th over, were shattered. But there is no shame in losing to individual brilliance. Karthik batted like a man possessed. It reinforced the belief held by many that had he not appeared at the same time as one Mahendra Singh Dhoni, Dinesh Karthik would have reached different heights with the men in blue. An absolutely brilliant 29 off 8 balls under immense pressure in a final is ample testimony to that.

For those who missed it, here's the show