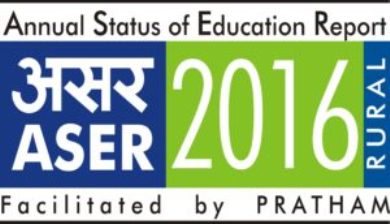 Editor-in-Chief of indiacommentary.com. Current Affairs analyst and political commentator. Writes for a number of publications. View all posts by this Author
The 2016 edition of the Annual Status of Education Report is out. This report is brought out by Pratham, an NGO in the education sector. The reports findings more or less tally with the earlier National Achievement Survey for class III, V and X (2014, 2015) by NCERT, and the 2015-16 elementary education survey by District Information System for Education (DISE).

All three reports point to the fact that there have been improvements in elementary grades in learning outcomes. They also show huge progress in government schools. But the worrisome fact remains that a huge number of students are still not learning what they should at their age. This age-learning disparity is alarming and measures should be taken to rectify it through necessary inputs  either by improving the quality or performance of teachers or by designing suitable curriculum or by providing additional teaching aids.

These reports delve deep into the education system to monitor policy implementation on the one hand and give out a report card of what is happening as a result of these policies. Hence, they help in identifying whether current policies are working and if not, why. The problem areas are pinpointed and this helps the government in designing better policies or in improving upon the implementation part.

One more thing all the three reports point out is that although there are improvements, some states are slipping badly. Government schools are witnessing a surge in enrolments with Kerala and Gujarat leading. Private school enrolments have shown a slight dip. But three states, Madhya Pradesh, Chhattisgarh and Uttar Pradesh have shown significantly lower enrolments.

The report also shows that reading ability has increased in primary classes while remaining stable in middle classes and dipping at Std VIII level. Standards in Arithmetic has improved in government schools while English comprehension ability has remained unchanged in both government and private schools in lower grades but continues to decline in upper grades.

Attendance figures in primary and upper primary grades remain almost the same but there is considerable variation across states. States like Himachal Pradesh, Punjab, Uttarakhand, Haryana, Nagaland, Mizoram, Gujarat, Maharashtra, Karnataka, Andhra Pradesh, Kerala and Tamil Nadu have attendance levels that are above 80%. But in states like Uttar Pradesh, Bihar, Manipur, West Bengal, and Madhya Pradesh, attendance rates range from 50 to 60%.

The report also shows that there has been good improvement in facilities in schools. Toilets have increased with nearly 70% of the schools visited having useable toilets. More than 55% schools had useable separate girls toilets. Availability of drinking water in 74% schools showed a small decline but four states, Bihar, Chhattisgarh, Gujarat and Himachal Pradesh had drinking water in more than 85% schools. The report found no improvement in computer availability or library facilities.

The government needs to take a hard look at the quality and performance of teachers in all schools. Are we allowing unfit teachers in classrooms? If not, then why is the quality of learning not improving substantially? Are newer teaching aids, in addition to books, needed? Do teachers need to undergo orientation courses? Does the curriculum need to be redesigned? The thrust should be on improving reading, comprehension and arithmetical ability in primary and upper primary grades. The government needs to act on these findings to give children the ability to absorb, assimilate and apply, without which they will be lost in a fast-changing world. The three As should be the cornerstone of education.