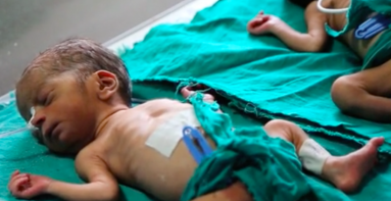 Saving The Child And The Girl-Child

Saving The Child And The Girl-Child

Linus tackles things head-on. He takes sides in his analysis and it fits excellently with our editorial policy. No 'maybe's' and 'allegedly' for him, only things in black and white. View all posts by this Author
In one of the most heartening reports to have come out in recent times, it is seen that child (and infant) mortality rate in India has gone down substantially. The under-five mortality rate (U5MR) has gone down from 43 per 1000 in 2015 to 39 in 2016, a decline of 9% in just one year. In absolute terms, it meant that 120000 fewer children died in 2016, bringing the number under-1 million for the first time ever.

The second and even more important and happy fact is that the gender gap in these deaths is progressively being reduced. Previously, a lot more girls used to die than boys. It is still the same story, but the gap is being reduced and even reversed in some states. The current U5MR by gender is 37 per 1000 for male children and 41 for females. It has been reduced to 11% from as high as 17% two years back. States like Chattisgarh, Delhi, Gujarat, MP, Odisha, Tamil Nadu and Telangana have reversed the trend.

This is a combination of two factors  policies followed by the government and a realization in Indian society that a girl is as important and valuable as a boy. The government has focused on better hygiene, good medical facilities, RMNCH+A (reproductive, maternal, newborn, child and adolescent health) interventions under the National Heath Mission, vaccinations and strengthening of service delivery. This has yielded dramatic results. Separate toilets for girls at schools, toilets at home (which negate the need for open defecation, a possible and strong source of female genital diseases) and the Beti Bachao, Beti Padhao campaign have all created awareness that the health of girls is important.

On the other hand, more and more parents are now not concerned about the gender of their unborn child. Clinics across India that surreptitiously conducted the banned gender determination tests have reported drastic fall in business. Lesser people are aborting girls in the womb. Although discrimination in providing facilities for the girl-child still exists, happily the trend is being reversed. Parents are spending more to take care of the girl-childs health and education. If this trend continues, girls will have their rightful place in society in not too distant a future.