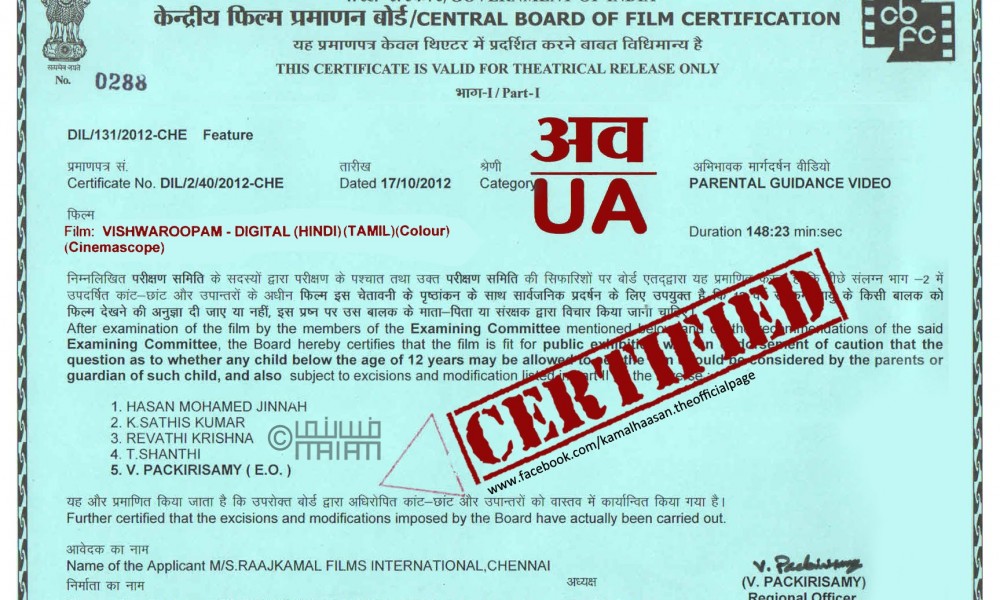 Film Certification Should Move With the Times

Film Certification Should Move With the Times

Editor-in-Chief of indiacommentary.com. Current Affairs analyst and political commentator. Writes for a number of publications. View all posts by this Author
image courtesy: youngisthan.in

The government has taken a step in the right direction by appointing a committee headed by renowned filmmaker Shyam Benegal to suggest revamping of the Central Board of Film Certification (CBFC), often known as the Censor Board. What is heartening is that the committee members have been chosen with care â filmmaker Rakyesh Omprakash Mehra, advertising expert Piyush Pandey, film critic Bhavana Somayaa, NFDC MD Nina Lath Gupta and Sanjay Murthy, joint secretary, films in the I & B ministry. This was a long overdue move and Benegal is expected to put his vast experience to good use to suggest practical and contemporary solutions.

Meanwhile, I & B minister Arun Jaitley and his deputy Rajyavardhan Rathore made the right noises when they me the committee members recently. While Jaitley said that film certification guidelines need contemporary interpretation and should be as non-discretionary as possible, Rathore said that the functioning of the CBFC needed to be changed and the government intended to bring about major reforms.

Benegal, on his part, was clear that there was a need to move towards new system of grading films in terms of age, maturity, sensibility and sensitivity of the audience instead of censorship. He said that the existing guidelines might be amended or changed suitably toward this end.

Jaitley makes a valid point when he says that guidelines should not be discretionary. We have seen that each CBFC chief brings in his own set of rules to complicate matters. The current chief, Pahlaj Nihalani, has even put out of a list of words that cannot be used. Some of these words are so common (Bombay, for instance) that it is beyond comprehension why they cannot be used. Things should be in black and white and personal prejudices of the Censor chief should not stop a film from being exhibited.

Indian criminal laws are clear. Apart from proscribing a film that is blatantly designed as a vehicle to promote enmity between communities or a film that peddles pornography in the guise of artistic freedom, no film should be denied an audience. With the internet and the vast illegal DVD market making available all kinds of films, the CBFCâs denial of certification will only kill local enterprise and perhaps make filmmakers explore other avenues for releasing their films. Let us move with the times and follow the Benegal formula of grading films differently for different audiences as per their age, maturity, sensibility and sensitivity.

This is not to say that the CBFC has not moved with the times. Sexually explicit scenes, gory violence and abusive language have been increasingly allowed. But the problem arises when personal prejudices of the CBFC members stop a film. For this, clear guidelines must exist in detail. Certification should be broad-based no film should be banned after it is cleared by the CBFC. The last is very important as a small group of people or even an individual can sometimes stall a filmâs release by making objections or filing court cases on specious grounds. The ground rule should be that if someone or some community is hurt by what is shown in the film, it should tell its members not to see it.