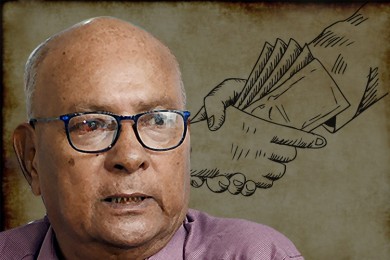 Holding an extreme view and carting the ball out of the park is what interests him most. He is a hard hitter at all times. Fasten your seatbelts and read. View all posts by this Author
It is often said that people who are successful in any walk of life should act as role models for the youth. This is based on the assumption that such people are virtuous and can teach others what it takes to succeed in life. While this is true in most cases, there are some who turn this on the head. The case of former footballer Subhash Bhowmick, who played for India and the clubs East Bengal and Mohun Bagan in the seventies and was a powerful forward, is one such. A brilliant player and a much-respected coach, he blew it all away as he was unable to resist the temptation to make easy money.

Bhowmick was employed with the Anti-Evasion Wing of the state excise department in West Bengal. In 2005, he raided a businessman who had excise refunds pending and had applied for the same. The raid was just to scare the person. Once there, he demanded Rs 4 lakh as bribe to get the refund work done. The businessman informed the CBI who laid a trap. They caught Bhowmick red-handed when he was accepting the first installment of Rs 1.5 lakh. Bhowmick has been found guilty by a special CBI court and has been sentenced to 3 years in prison.

Bhowmick was currently working as the technical director of East Bengal FC. With his wide experience and coaching abilities, he was shaping the careers of many budding footballers. When the above incident took place, he was the head coach of Mohun Bagan FC but was removed as soon as he was arrested. He could have used his experience to live a respectful life. But the lure of easy money was his undoing. Bhowmick will of course appeal to a higher court but evidence is strongly against him. He must resign himself to leading a life of disgrace.