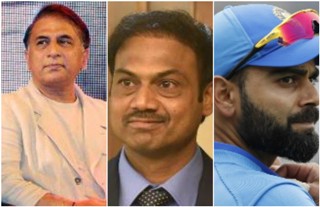 Sunil Gavaskar has used very strong words to criticize the automatic selection of Virat Kohli as the captain of the Indian cricket team for the tour of the West Indies. He has called the selectors "lame ducks" and has said that they "lacked stature". Writing in his syndicated column, Gavaskar hinted that Kohli continues to get the team he wants as he is able to browbeat the selectors due to his superstar status while they cannot do anything as they are relatively small fries.

Gavaskar pointed out that Kohli's appointment as captain was till the World Cup. He says the selectors dispensed with the procedure by not meeting him separately, "even if it was for five minutes", to review his captaincy and announce his reappointment. Instead, they directly invited him to the meeting to select the team. This, he thinks, is highly improper and against established conventions.

While one is not enamoured of the present selection committee consisting of MSK Prasad (played 6 Tests and 17 ODIs for India), Sarandip Singh (3Tests, 5 ODIs), Gagan Khoda (2ODIs), Devang Gandhi (4 Tests, 3 ODIs) and Jatin Paranjpe (4 ODIs) and fully supports Gavaskar's view that they lack stature, one disputes his charge that while players like Kedar Jadhav and Dinesh Karthik got "dropped after below-expectations performance, the captain continues despite much below par expectations".

Did Virat Kohli fail in the World Cup? He scored a total of 443 runs in 9 innings at an average of 55.37 and a strike rate of 94.05, with 82 as his highest score. There were no hundreds, but his performance cannot be termed bad. It obviously pales in comparison with the superb Rohit Sharma but it was the second-best performance in the team. It was sad that both these players failed in the semi-final against New Zealand, but Gavaskar is wrong in picking on Kohli.

Where Gavaskar is right, though, is about the selection committee. The BCCI should immediately revise its rules to make it mandatory to appoint only those cricketers who have played a minimum of 10 Tests or 15 ODIs for India as selectors. One knows that it will be difficult to get such persons from all zones and for that, the policy of having zone-based selectors should be scrapped. It will be better to appoint two or three regional ex-first-class players as talent scouts in each region. These scouts can then report to a particular selector who will take a look at the suggested players. The selection committee should be made up of experienced cricketers and not small fries.