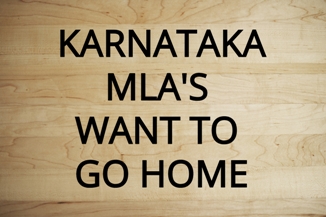 Homesick MLAs Want To Be Back With Family

Homesick MLAs Want To Be Back With Family

By our team of in-house writers. View all posts by this Author
People are talking about how the Congress and the JD(S) are holding their MLAs hostage and not allowing them to go home. It has been reported that the lawmakers are home sick and have demanded that they be allowed to go home. But party handlers are so scared of poaching, especially with BSY still smarting after a humiliating defeat that the MLAs have been told that there is going to be no respite till after the ministry has been sworn in and that will be after Thursday.

People are saying that this is highly immoral. They are saying that with the Congress-JD(S) already having won the first round, they should allow the MLAs to go back home, if for nothing else than as a reward for staying with the party in the hour of need. But people also recognize that once the MLAs go back home there is no surety that they will back the combine on the given day. People say once away from the party pressure, the MLAs will make a lot of calculations and will be open to influence from family members, friends and other people.

But the people are still of the opinion that confining MLAs in a resort  even with 5 star trappings  is not a done things if they want to go home. This forceful confinement of an adult against his wishes is even unlawful. People say it just goes on to show the depths politics has plumbed in India that MLAs have to be held captive in order to have a government in place.