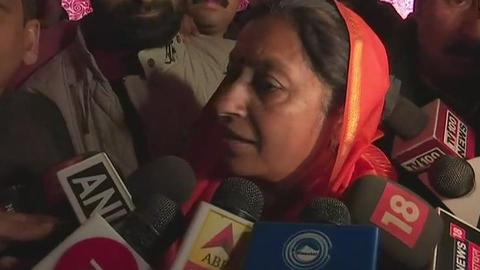 By our team of in-house writers. View all posts by this Author
People are talking about the courageous policewoman in Shimla who gave a resounding slap to Congress legislator Asha Kumari after she hit her first. In what must be a first for India, a politician got back as good as he  in this case she  gave. People are saying that this is as it should be. Most security personnel are so overawed by politicians that they act as fawning fools in front of them, bringing disrepute to their position. Any security personnel, however low down the hierarchy, if he or she is given a responsibility to guard a particular place, should always demand identity papers and frisk everyone, VIPs included. That is part of his duty. In this case, people are pointing out that Rajiv Gandhi, when he was Prime Minister, had allowed a security guard to frisk him and had even commended him for carrying out his duties with such diligence during the Commonwealth Games. People say only petty politicians with puffed up chests indulge in such HPDA  hateful public display of anger.

In the instant case, Asha Kumari reached the Congress office late for a meeting. Inside, Rahul Gandhi, who has Z category security, had already started the meeting and the gates had been closed. Displaying the usual swag of a politician, Asha Kumari pushed people and wanted to get inside. When stopped by the police, she got into an argument and hit the policewoman after alleging that they had pushed her. The constable spared no time in hitting her back.

People are saying that politicians should stop behaving like they own everything, including security personnel. People say that as it is there have been many videos and reports showing that high-ranked police officers and politicians treat their security details as chaprasis, making them run household errands and even polish their shoes. People say that is very demoralizing for the police force. If now politicians start hitting persons doing their duty, then there will be no end to this. People say politicians must be shown their place once and for all and maybe this slap is the beginning of that.