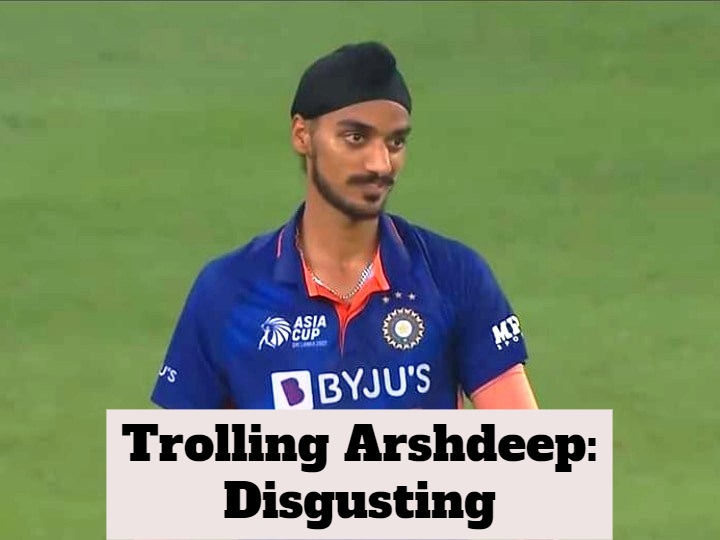 Imputing Motives For A Dropped Catch Is Disgusting

Imputing Motives For A Dropped Catch Is Disgusting

Young Arshdeep Singh is fast emerging as the player to watch and is a vital part of Team India in the shortest format of the game. Yet, when he dropped Asif Ali's catch in the 17th over of the Super Fours' match in the Asia Cup, the way he was trolled and criticized (including vandalism of his Wikipedia page where he was called a Khalistani terrorist) was disgusting.

It has become a recurring feature to find a scapegoat every time India loses to Pakistan. Last year, it was Mohammed Shami who was subjected to vile abuse after he was hit for a few runs in the T20 World Cup. Then, the abuse was religious and Shami was accused of being anti-national and allowing a Muslim nation win. This time, Singh has been called a Khalistani terrorist and an anti-national in the same manner.

This is absolutely uncalled for and unfair. A catch can be dropped any time in a game and imputing motives to the player is wrong. It scars the player and someone as talented as Arshdeep needs all support from cricket lovers to forget his mistake. It is good that former players have come out to support him and have blasted those who have criticized him.

It has to be recognized that on that given day, Pakistan played better than India and won the match. What could have happened if Arshdeep had not dropped the catch is impossible to judge. For that matter, what could have happened if Rishabh Pant had not played that atrocious shot during an important stage in the match also cannot be judged. The game is played with much tension in the middle and arm chair critics should refrain from demoralizing cricketers.