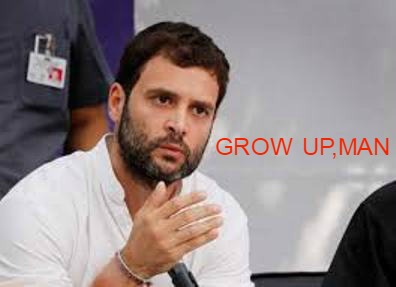 Incorrigible Rahul and His Latest Gaffes

Incorrigible Rahul and His Latest Gaffes

By our team of in-house writers. View all posts by this Author
People are talking about how Rahul Gandhi cannot even make a five minute speech without putting his foot in his mouth several times.

The occasion was the opening of low priced canteens for the people of Karnataka by the Congress government in the state.

The Congress heir apparent was so taken up by excitement in being part of an initiative in the only major state being ruled by his party that he goofed up several times.

Then, twice, he almost used the word campaign instead of canteen.

Finally, in a major blunder, he thought Bengaluru is a state and kept referring to the fact that the people in every city of Bengaluru would never go hungry under the Congress which is opening these canteens for their benefit.

People are saying Rahul Gandhi is incorrigible. They are saying that even his secret foreign tours  for tutoring or for rejuvenation  are not going to give him that which is needed to run a country like India. People are wondering how qualified Congress leaders can bear to be lorded over by someone like him.

People are of the opinion that at this rate, even the Gandhi surname is not going to be enough for Rahul to fulfill his, and his mothers, cherished ambition of him becoming the Prime Minister of India.