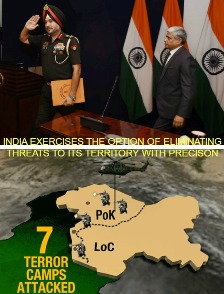 But once the political decision was taken, it was the Army  specifically the handpicked paratroopers of the Special Force  that carried out the operation with utmost precision and efficiency, showing that the Army is capable of catching Pakistan unawares and hitting at identified targets without resistance. They completed the job under the cover of darkness in roughly four hours. In the process, they destroyed several terror launch pads and have reportedly killed 38 terrorists and 2 Pakistani soldiers. The execution and success of this daring operation has come as a shock to Pakistan and for once, it is flummoxed. But as usual, it is in a state of denial. The official Pakistani line is that it was just a ceasefire violation by the Indian Army in which 2 Pakistani soldiers were killed. They are refusing to admit that terror camps were destroyed by India inside their territory.

Obviously, Pakistan cannot admit what India is claiming. For, admitting would mean that terror launch pads exist inside Pakistan, which Pakistan has always denied. Admitting would mean that terrorists were killed inside Pakistani territory, the existence of whom Pakistan has steadfastly denied. Admitting would also mean that Pakistan would have to admit that the Indian Army was successful in conducting the operation, something that the propaganda-driven Pakistanis will never admit. Remember that when Pakistan was on the verge of losing the 1971 war, its state run broadcasters were saying that Zulfiqar Ali Bhutto would pray at Delhis Jama Maszid soon. But the biggest reason is that if they admit the successful strikes by India, they will have to retaliate. Despite all the bravado and the high-sounding rhetoric, Pakistan does not want escalation of hostilities. It has fine tuned the proxy war and is most comfortable with that. So they will keep denying any successful Indian operation across the LoC.

The government has been doing all the right things post the strikes. Envoys of all major countries have been briefed about why the strike was conducted. An all-party meeting, chaired by the Prime Minister, was held to brief the opposition about the surgical strikes and seek their support. Thankfully, the entire opposition has rallied behind the government and supported the strikes. Thankfully, also, there has not been any unnecessary chest thumping by the usual elements (read Hindutva votaries) and neither has there been ugly criticism from the usual suspects (read Leftist intellectuals). The country needs to stand united and support the government and the armed forces. Pakistan should be forcefully made aware  by action and not by mere words  that India will protect its borders with more than usual alacrity. If this means destroying camps and terrorist inside Pakistan with surgical strikes, so be it. After all, it is better to nip the trouble in the bud.