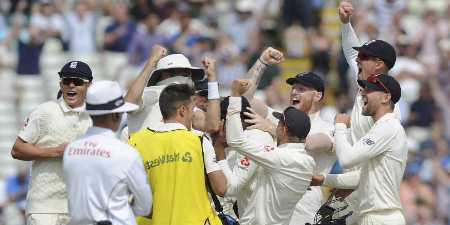 Holding an extreme view and carting the ball out of the park is what interests him most. He is a hard hitter at all times. Fasten your seatbelts and read. View all posts by this Author
There is a saying in Hindi  akela chana bhand nahi fod sakta. What can Virat Kolhi do alone if others in the team are not going to stand up and be counted? Although the Indian weakness against the moving ball in helpful conditions is well-documented and real, one feels that a little bit of application from the so-called stars would have helped India put it across England in the first test.

The bowlers did their job well  first restricting England in the first innings after they were off to a flying start and then putting them on the mat in the second. The fielding was also good, with Virat Kolhi once again being outstanding in running out his opposite number Joe Root with a direct throw. One wonders why his obvious genius and infectious enthusiasm doesnt rub on his team mates. Have they mentally prepared themselves to lose?

Not one among Murali Vijay, Shikhar Dhawan, KL Rahul, Dinesh Kartik and Ajinkye Rahane could play even 10 overs. If even one of them had stayed with the skipper in either of the innings, the result would have been different. But a complete lack of application coupled with wrong shot selection ensured that India was beaten despite brilliant innings from Kohli in both the essays.