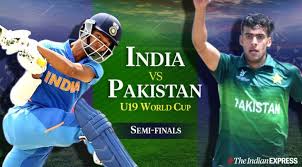 The Indian colts displayed killer instinct, nerves of steel and superior ability and talent to beat Pakistan by 10 wickets in the semi-final of the ongoing U-19 World Cup. The Indian bowlers first made short work of the Pakistanis by bundling them out for a paltry 172 and then the openers made light of the modest target to reach home without losing a wicket. It was one of the most comprehensive victories of the tournament and coming in the semi-final, it displayed the prowess of the Indian team to the full. India will now play the winner of the other semi-final between Bangladesh and New Zealand. The final is slated for Sunday.

Although Pakistan started reasonably well and were 118 for 3 wickets in the 30th over, they were not allowed to build on the score due to some excellent bowling by the Indians. Kartik Tyagi, in particular, was awesome. He is the fastest Indian bowler in his age category and he reserved his best for the Pakistanis. His well-directed yorkers were too hot to handle and unsettled them. In the event, wickets kept falling at regular interval. Pakistan lost its last 7 wickets for a mere 54 runs from thereon.

In the Indian run chase, the in-form Yashasvi Jaiswal once again showed his class by hammering a century off the hapless Pakistani bowlers. Gone are the days when Pakistan would have a fearsome pace duo operate from both ends to torment batsmen around the world. This Pakistani attack would not pass muster in any club side in any metro in India. Jaiswal was ably supported by the elegant Divyansh Saxena who made 59. The target was achieved in just 35.2 overs.

The class displayed by the Indian youngsters is a tribute to the ability and hard work of Rahul Dravid, the man who has put in place a junior cricket structure that is the pride of India and envied by the rest of the world. His efforts have meant that the Indian bench strength is awesome and the pipeline is bursting with talented and hardworking youngsters who have been instilled with immense self-belief. The BCCI needs to be congratulated for having one of the best talent scouting and development systems in world cricket.