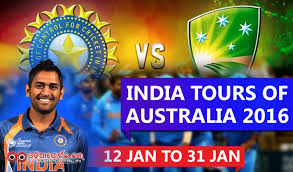 Yogendra is undecided whether he wants to be a writer. So he writes to see if he can be a writer. Ha Ha View all posts by this Author
Suddenly, the Indian cricket team is consistently at the losing end in Australia, despite some good individual performances. Critics, Sunil Gavaskar being the most prominent among them, have started sounding the warning bells. Mahendra Singh Dhoniâs captaincy, as well as his form with the bat, is under the scanner. Everything seems so wrong when the team is losing.

It seems that with Dhoni woefully out of form, the teamâs batting suddenly ends at number four and the famed depth is nowhere to be seen. The way 9 wickets were lost for 40 odd runs in the 4th ODI shows that the team has become top-heavy. It also gives credence to Gavaskarâs view that we lost all matches from a winning position.

But batting is not the main concern. It is the bowling that has landed the team in the soup in all matches so far. None of the bowlers look capable of stemming the flow of runs, let alone take wickets. But with the Indian top order dishing out the same treatment to the Australian bowlers, is it fair to criticize the bowlers? Some of the debutants like Sran, Dhawan and Bumrah have in fact impressed. Injuries to Md. Shami and Bhuvaneshwar Kumar aslo had a role.

Does the team needs a complete overhaul, as some critics have suggested, or is it that things are not falling in place for this team? As there is a winning momentum, so also there is a losing momentum. It must be sad for the likes of Rohit Sharma, Shikhar Dhawan and Virat Kohli to see their fantastic individual efforts come to naught as the team keeps losing.

Fielding and bowling are the areas India has to concentrate on. Also, the batting order needs to be settled. Rahane has been made to play musical chairs. He is too good a batsman not to be in the team, His order has also been tinkered with. It is a mystery why Ashwin is being kept out. A thorough analysis is required to explain these defeats.