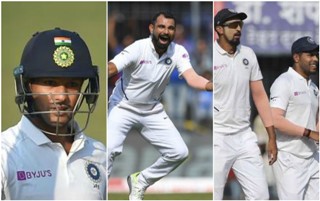 Inexperienced Bangladesh No Match For India

Inexperienced Bangladesh No Match For India

India beat Bangladesh by an innings and 150 runs inside three days in the first Test at Indore. It was a comprehensive victory that proved India's superiority in all departments of the game and showed the Bangladeshi team to be inexperienced and lacking class. The Bangladeshis had given India a tough fight in the recently-concluded T20 series but when it came to the longer version of the game, they showed no application, grit or ability to occupy the crease.

The Bangladeshis could make only 150 in their first innings. They were subjugated by an inspired Indian pace attack with all three seamers - Ishant Sharma, Umesh Yadav and Mohammed Shami - excelling. Shami was particularly impressive with his ability to move the ball both ways at express speed. The inexperienced Bangladesh batsmen were all at sea against the three. Virat Kohli, in his post-match press conference, called them a "dream combination" and said they can torment any opposition on any surface. It bears remembering that the best Indian fast bowler, Jasprit Bumrah, was not on duty in this Test.

Such is the depth of this Indian batting lineup that despite rare failures from both Rohit Sharma (9) and skipper Virat Kohli (0), the team managed to notch up 493 for 7 in its only innings, thanks to another superlative display of quality batting from Mayank Agarwal who hit another double century. Granted the quality of the Bangladeshi bowlers left a lot to be desired, but still getting 243 in 330 deliveries is excellent by any standards. He was well supported by Cheteshwar Pujara, Ajinkye Rahane and Ravindra Jadeja. Umesh Yadav, promoted in the batting lineup, also used the long handle to great effect to notch up quick runs that allowed India to declare on the third morning.

The second innings of the visitors followed the pattern of the first. They hopped, skipped and jumped as the Indian pace trio put up a hostile bowling performance. The Bangladeshis could manage only 213, with Mushfiqur Rahim top-scoring with 64 and Liton Das and Mehidy Hassan going past the 30s. The Bangladesh team felt the absence of the vastly experienced Shakib Al Hasan who has been suspended by the ICC for not reporting a contact made by a bookie. The inexperienced bunch had no mentor to guide them.