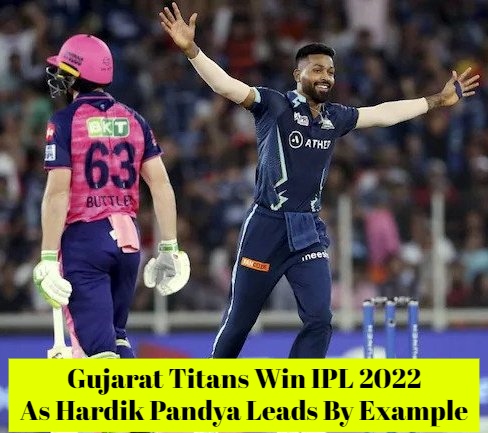 IPL Final: Pandya Shows Why He Is Being Hailed As The New 'Captain Cool'

IPL Final: Pandya Shows Why He Is Being Hailed As The New 'Captain Cool'

Hardik Pandya, who is increasingly being hailed as the new captain cool for his excellent handling of the Gujarat Titans (GT) squad, chose the IPL final to showcase his immense all-round talents and captaincy skills to lead from the front and propel GT to title triumph in their maiden season. In front of wildly cheering home fans (numbering more than a lakh, said to be the highest for any cricket match), Pandya's boys did what was unthinkable when the tournament started.

After Rajasthan Royals (RR) skipper Sanju Samson chose to bat after winning the toss, the GT bowlers bowled to a plan and did not allow them any liberties. When it looked as if Jos Buttler would once again take the match away as he opened up with a pull and a cover drive, Hardik Pandya deceived him outside the offstump with a ball that was of a perfect length and a teasing line. Despite being in awesome form, Buttler could not take his bat away and offered a simple catch which Wriddhiman Saha gleefully accepted behind the stumps. After that, there was no resistance from RR batters and they were restricted to just 130, a total that was not enough to win the title. Pandya returned excellent figures of 4-0-17-3.

GT began disastrously as they lost both Saha and Matthew Wade early to make it 23 for 2 inside the powerplay. For RR, both Trent Boult and Prasidh Krishna were on fire although Krishna was leaking runs. But then came Pandya and in Shubman Gill's company, repaired the damage. After he was out after scoring a valuable 34 off just 30 balls, Gill, who remained not out on 45 and David Miller (32 not out) played with a good degree of caution to ensure no more hiccups and a good victory with 11 balls to spare.

For RR, the overdependence on Jos Buttler became their undoing as none of the other batters rose to the occasion once he departed cheaply. But GT must be praised for the manner in which they stuck to their plan and bowled to the field to fox the RR batters. In the end, Pandyaâs individual brilliance overshadowed all else and the record crowd went home happy.