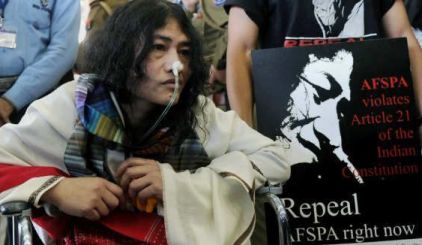 Irom Sharmila Did Not Lose, Manipur Did

Irom Sharmila Did Not Lose, Manipur Did

Anukriti is a student who dabbles in writing when she finds time. View all posts by this Author
For 16 years of hunger strike to get AFPSA repealed and the armed forces removed from Manipur, Irom Sharmila was rewarded with 90 votes when she stood for election against the sitting chief minister Ibobi Singh from Thoubal. Surprisingly, 143 hit the NOTA button. How on earth can a Manipur resident think none of the candidates are fit if the list contains Irom Sharmila?

Irom Sharmila spent the best years of her life to protest against army atrocities on her innocent Manipuri brothers and sisters. But the people were not grateful. Sacrifice does not count in our society, especially where politics is concerned.

Money and muscle power defines who wins or loses. Rarely is an election decided on principles or issues. The party that has the most charismatic or notorious leader, backed by a well-oiled election machinery that has goons masquerading as cadre and a generous war chest, often wins election. It seems Irom Sharmilas charisma was limited to the human rights groups. Otherwise there is no reason why she could lose.

There is one more thing though. Sharmila chose the wrong seat to contest. Pitting a debutant like herself against a crafty and seasoned politician like Ibobi Singh was a mistake. Apart from making a statement, it served little purpose. She should have stood from where she belonged, where people knew and respected her. If her purpose was to carry on with her battle against AFPSA and other issues as a legislator, she made a big mistake by taking on Singh and not getting elected.

Finally, it reflects very poorly on the priorities of our society if a person like Sharmila loses. Indians send people with rape, arson, robbery and other criminal cases pending against them to their legislative bodies. These people do not contribute anything to either the debate on vital issues or to nation building. Sharmila would have raised important issues in the Manipur assembly. Her voice would have carried weight as she is internationally renowned activist.