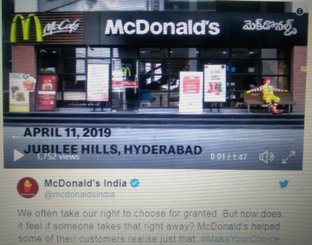 By our team of in-house writers. View all posts by this Author
People are talking about the very topical and timely ad about the importance of voting that the food chain McDonalds put out on the day voting took place in Hyderabad. The ad shows that the staff of McDonalds does not allow people who have not voted to choose items on the menu but hand them pre-selected items instead. People who have voted are given items of their choice. The ad tries to show the importance of voting to get the government of your choice. People say that it uses the choice factor in a very simple yet hard-hitting way to put the message across.

In the ad, when a girl sees that a person who has voted is given items of his choice, she requests him to order for her. But he just makes a face at her and moves on. People say that voters crib about bad governments but when the time comes to choose they put out a big list of reasons why they do not vote. There is simply no excuse for not voting. People say that if you can stand in a queue every week to buy movie tickets or refreshments during the intermission, then it is criminal for you not to vote. It takes lesser time to vote than it takes to buy a combo at the multiplex refreshment counter and the bonus is that you dont have to pay and it is to be done only thrice (local, state and national) in five years.

People say that despite the McDonalds ad and a media blitzkrieg by the government and other organizations, the voting percentage has in fact gone down this time compared to 2014. People say that this is not the sign of a healthy democracy. People are saying that voters should not be indifferent and go to the booths to exercise their franchise.