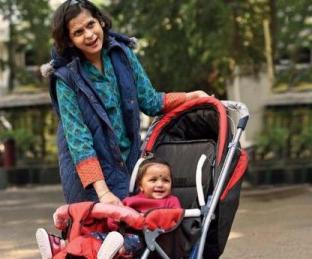 By our team of in-house writers. View all posts by this Author
Jeeja Ghosh is the Brand Ambassador for the 2019 Lok Sabha elections appointed by the Election Commission of India, which wants the forthcoming elections to be the most inclusive one. The EC has organized camps to enroll voters with a disability. Initiatives are being taken to make the polling booths accessible. I am happy to help in every way I can, said Jeeja, who has been an inspiration to many. She shared with me that she has helped in the creation of Cards to educate the disabled on the voting modalities and procedures.

Jeeja Ghosh is a woman of substance. Born with cerebral palsy (a condition caused by lack of oxygen in the brain either during pregnancy or birth) and an indomitable spirit, she has overcome many a hurdle to tread into uncharted territory. A graduate in sociology from Presidency College (now Presidency University), Jeeja did her post-graduation from Delhi University. Most would have stopped at that. But Jeeja went on to do a second masters in Disability Studies from Leeds University, UK. Back home, she became the head of Advocacy and Disability Studies at the Indian Institute of Cerebral Palsy.

She gave up the job last September because she intended to challenge herself further. She, along with partners Chandra Sen Gupta and Sayomdeb Mukherjee, co-founded non-profit organization 'Inclusion Infinite Foundation as well as limited liability partnership firm Ebullience Advisors. Both are startups breaking new ground in the sector and replace the charity-based model with a rights-based one. The idea behind two companies is that one will be able to support the activities of the other.

At a very personal level, Jeeja had pierced yet another glass ceiling when she and her husband Bappaditya Nag adopted a baby girl, Hiya. In doing so, she became the first Indian woman with cerebral palsy to adopt a child. Now, 11 months later, she is relishing the new role even as she confronts new challenges that motherhood entails. Motherhood is extremely rewarding and enjoyable. But it is also challenging, she said candidly.

The biggest challenge, Jeeja said, has been to find a nanny for Hiya. The realization that she needed help was very early. Looking after a toddler can be demanding. Hiya is a very ebullient child. She runs all around the house. I need someone to run after her, she explained. But these challenges pale in comparison to the joy that Jeeja and her husband are experiencing. Watching her grow every day is a wonder. The twinkle in her expressive eyes, the dimple in her cheeks when she smiles she never ceases to charm us, said Jeeja.

Bappaditya, who met Jeeja in 2008 and fell in love soon afterward, tied the knot in 2013. That his father was orthopedically disabled and mother was blind in one eye meant he had some idea about disability. But he learned about cerebral palsy only after meeting Jeeja. I fell in love with her naughtiness, her humour. She is also my mental strength and support, he said.

Realizing pregnancy could be risky for Jeeja, the couple decided to go for adoption and applied to Central Adoption Resource Authority (CARA) in 2016. The road to motherhood was not smooth as the couple struggled to convince the adoption committee that she was capable of motherhood. They met the child in Keonjhar, Odisha, where she was abandoned at a hospital by her biological mother after her birth in January 2018. They instantly fell in love with her.

But it took several trips to Keonjhar, emails to various authorities and furnishing documents to get the nod. On the way, humiliating questions were thrown at her. The district child protection officer described cerebral palsy as a mental disease and expressed apprehensions about Jeejas communication skills. Finally, in June 2018, the authorities handed the five-month-old baby to the couple.

In December, Jeeja lost her octogenarian mother, a dementia patient, who lived with her. My mother never gave up on me. She faced a lot of challenges during my childhood. I am now ready to face the challenges that Hiya throws at me, said Jeeja, chin-up and ready to rock the world.