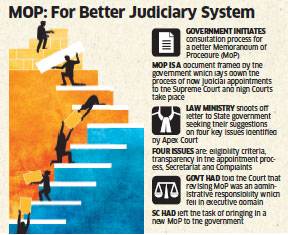 Judge Debunks Collegium: What is the Best Way to Appoint Judges?

Judge Debunks Collegium: What is the Best Way to Appoint Judges?

Editor-in-Chief of indiacommentary.com. Current Affairs analyst and political commentator. Writes for a number of publications. View all posts by this Author
picture courtesy:economictimes.indiatimes.com

There cannot be any doubt that an independent judiciary is a strong pillar of democracy. But is the independence of the judiciary limited to its powers of making judgments by interpreting the law or does it extend to administrative aspects also? There are many angles to the debate. The Supreme Court has itself said that no one can sit on judgment in a case that involves his own interests as it goes against principles of natural justice. Hence, the policy of judges deciding on appointment and transfer of judges, and that too in a manner that is opaque, also goes against that principle. Having struck down the NJAC Act and having not cleared the Memorandum of Procedures (MoP) for appointment and transfer of judges sent to it by the Centre, the Supreme Court has created a situation where huge vacancies are not being filled in the high courts. The matter has been further complicated by the refusal of Justice J. Chelameswars refusal to attend collegium meetings as he finds them lacking in transparency.

Justice Chelameswar has accused the other judges in the collegium of not having any constructive debate on the candidates and rushing through names by ganging up and letting majority prevail. Although Justice Chelameswar was the dissenting judge in the NJAC judgment and had written at length on the shortcomings of the collegium system in his dissenting judgment, the way he has now refused to participate in its meetings shows that much is wrong with the system by which appointment and transfer of judges is being done now. Hence, the need is for the judiciary and the executive to shed their respective rigid stances and work out a middle ground, perhaps around the MoP. The primacy of the judiciary needs to be maintained and the executive can be allowed to have a small say in the matter.