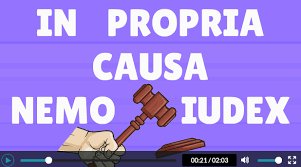 Judge Recusal is a Sensitive Issue

Judge Recusal is a Sensitive Issue

Editor-in-Chief of indiacommentary.com. Current Affairs analyst and political commentator. Writes for a number of publications. View all posts by this Author
A judge who sits in judgment over a case is expected to be fair and impartial. There are many reasons that can be assumed to affect a judges attitude. The main among them are:

There is no law in India to guide judge recusal. Taking advantage of this, lawyers have now made it a trend to ask judges to recuse themselves from cases. A few days ago, a Supreme Court bench of a bench of Justice J S Khehar, CJI and Justice N V Ramanna recently commented that if this continues, the court will be left with no other alternative but to lay down a law for recusals. The bench was hearing a PIL filed by Lt. Col. (Retd.) Anil Kabotra which sought the court to direct the Ministry of Law and Justice to take immediate steps to fill up existing vacancies in the judiciary as well to carry out reforms and expansion as per the 245th report of the Law Commission. During the course of the hearing, advocate Mathew J Nedumpara, who was not appearing in the case, intervened and sought the recusal of the CJI from the matter.

The bench was livid, first for the fact that the advocate intervened without permission, and then because he was making an unfair demand. Justice Khehar said we will like to hear you and decide the matter. We are here for years and you tell us to recuse. The bench further said that you people just come here and say things that this judge should recuse or that judge should recuse himself. We would like to lay down the law on the issue of recusal of judges.

Even if the Supreme Court lays down a law, there is no guarantee that the issue will die down. For, if judges of Supreme Court are to decide on their own recusal, it will lead to a conflict of interest situation. It is a guiding principle of law that no one can be a judge in his own case. A law for recusal exists in the US, but still problems arise. Hence, there needs to be a lot thinking to be done before a law can be made on the subject, either through judicial initiative or by legislative intervention.