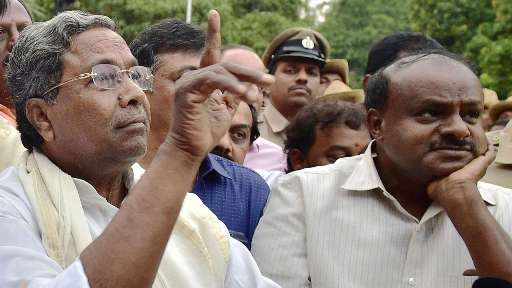 The Congress-JD(U) alliance is Karnataka is in trouble again. This time the patriarch H D Deve Gowda has spoken about the inevitability of mid-term polls in the state. He has also started the process of meeting local leaders in a bid to strengthen the party. These are clear signals that Deve Gowda thinks the alliance will not last more than a couple of months.

This alliance was doomed from the beginning. The Congress, despite getting bigger numbers and despite objections from state leaders, ceded the post of chief minister to the JD(U) just to keep the BJP away from power. It was clear that leaders like Siddaramaiah and Dinesh Gundu Rao would not take the situation lying down.

Of late, Siddaramaiah has started to arm-twist chief minister Kumaraswamy into accepting many of his demands, reducing him to a caretaker chief minister. In the past, Kumaraswamy had, more than once, let his guard down in public (even crying on camera once) and had spoken about the stress under which he was running the government. After the rout in the Lok Sabha elections, the glue of winning has also evaporated, leaving the alliance vulnerable. Attacks and counter-attacks have come from both sides for the dismal performance.

In such a scenario, the father-son duo of Deve Gowda and Kumaraswamy know that the Congress might pull the plug any moment. The Congress has already dissolved its state unit and is in the process of revamping it. Siddaramaiah said today that the alliance must be dissolved as the Congress party is not benefitting from it. This has put the issue in the high command domain. Rahul Gandhi will not be able to ignore the wishes of his regional satraps for long and one can see fresh polls in the state sooner than later.