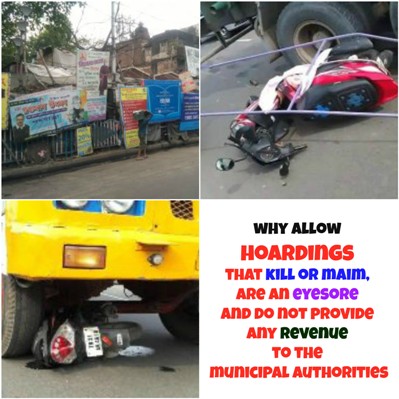 Killer Hoardings Must Be Banned Forthwith

Killer Hoardings Must Be Banned Forthwith

Urban spaces in India are increasingly being vandalized by illegal hoardings. Despite the municipal corporations not getting any revenue and the hoardings putting a large number of vehicles and pedestrians at risk, there has been a huge spurt in any and everyone hanging their boards at street corners and other prominent places on busy roads in almost all cities and towns of India. Political parties are the biggest offenders in this regard.

There was an incident in Chennai where a woman was run over by a truck after a hoarding fell on her scooter and she lost balance on a busy road. The board was precariously placed on the road divider by AIADMK workers for the family reception of a party councilor. In another incident in Coimbatore, a woman on scooter was grievously injured and suffered fractures after she tried to dodge the leaning pole of an AIADMK flag and was hit by a truck. In Kakinada in Andhra Pradesh, a woman was killed when a hoarding from the second floor of a building fell on her as she was walking on the road.

While political parties hog the maximum space, private advertisers are not far behind. From products to events, social and theatrical, are all advertised using this route as it turns out to be much cheaper than official media. If one avoids paying corporation taxes, which most do, then the flex board is now available as cheap as Rs 3 per square feet if made in bulk. But political parties, companies, event managers and even individuals do not think about the danger they are putting pedestrians and vehicles into by their irresponsible act. Most of the times, these boards are bound on hollow iron sections or cheap wood channels and hung with thin wires without proper support and can fall without warning.

There must be a strict law to prevent this. The political parties must take the lead to limit putting up their hoardings at designated spots only and ensure that they are firmly fixed. The municipal corporations do have a policing system to take down illegal hoardings but it is obvious that either the officials are corrupt or the department is woefully understaffed because there is a sea of illegal hoardings all over the streets. There are several court orders against putting up such hoardings but no state government or municipal authority acts on them. If the authorities do not wake to this serious menace, more people will be killed or injured and the people will be forced to start a movement against it.