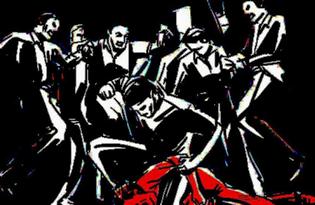 Editor-in-Chief of indiacommentary.com. Current Affairs analyst and political commentator. Writes for a number of publications. View all posts by this Author
A young man is assaulted in Kolkata, just some metres away from a police station twice within a space of five hours. He is first assaulted freely, pushed around in the area in the lanes and bylanes and then he is tied to a tree and beaten some more. Witnesses reveal that he was tortured in various ways. What was his fault? He was suspected to have stolen a mobile phone belonging to the son of the man who gathered the group who assaulted him. The man died the next day. The police have arrested two persons and are trying to put together the sequence of events that lead to the lynching and the death.

The area where the lynching went on is densely populated, close to the famous Kalighat Temple and near the Kalighat police station. It is inhabited by middle-class people who are expectedly educated and civil. It also has several slums where daily labourers, sweepers of Kolkata Municipal Corporation and other assorted people reside. Yet, no one ventured out to raise a protest and help the young man. He was left tied to a tree from 6.30 to 10 am in the morning, the time when the area is buzzing with people. Yet no one came forward to help him. Increasingly, mobs are taking the law in their own hands and more increasingly and alarmingly, no one is coming forward to prevent them or at least report the incident to the police in time so that the victim can be saved.

All it would have taken a concerned citizen who could see the assault from his or her window in a nearby building was to dial 100 and report the incident to the police control room. They would have relayed the same either to the local police station or to the many flying squads that are supposed to roam the streets to keep an eye on crime. That nothing of that sort happened points to both  apathy and a fear of retribution. Citizens either no longer react to happenings in their neighbourhood unless their personal interest is involved or are afraid that those who indulge in such crimes will target them if they raise a voice. In many cases, the apathy is a result of the fear.

What is our society coming to? Why do otherwise normal people behave in such a manner when they are part of a mob? Some months ago, in an ugly incident, supposedly bhadralok (Bengali equivalent of gentlemen) commuters beat up a young man for allegedly being too intimate with his female friend in a public place. The picture published in newspapers the next day showed absolutely normal office goers in their forties and fifties taking devilish pleasure in raining blows on the young man. Then, in another incident about a year ago, people from a nearby slum illegally trespassed into a high rise complex and destroyed more than 50 vehicles just on the suspicion that a car from the complex was involved in a road accident nearby. It later turned out that their suspicion was wrong. Groups regularly target women returning late from work. Rowdies regularly beat up house owners if they protest their drinking sessions in front of their house.

It is a failure of policing if normal citizens fear these mobs and if these mobs can do whatever they feel like. There is no doubt that most of those who constitute these mobs are politically connected. Parties need them to take part in rallies or simply provide muscle power when needed. Hence, even if they are arrested, a simple phone call often gets them released. This adds to the fear of the citizens as they return to the locality with puffed up chests and rain taunts on those who complained against them. The Supreme Court has already given an 11 point prescription for mob lynching and other incidents of violence committed by a mob. It has also asked Parliament to enact a law on the subject. But till that happens, will it be too much for political parties to stop giving protection to these rowdies?