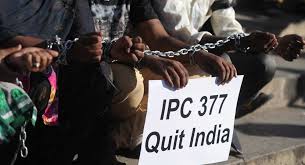 Editor-in-Chief of indiacommentary.com. Current Affairs analyst and political commentator. Writes for a number of publications. View all posts by this Author
Supreme Court refers petitions on Sec 377 to larger bench

The Supreme Courtâs decision to refer the curative petitions on the constitutional validity of Sec 377 to a five member constitutional bench has naturally elated the LGBT community as they see it as an opportunity to present their case once more in a better way to get a favourable judgment. But it needs reminding that the court has not issued any notices. It has just referred it to a larger bench which will now decide whether it will entertain it at all.

It also needs reminding that the apex court, in its order reversing the Delhi high court decision and making gay sex criminal once again in December 2013, had clearly stated that the section was not invalid according to the constitution. It had then also said that it was for the competent legislature to either delete or amend the section in order to decriminalize gay sex.

Lawmakers are not serious

But the lawmakers have not had time in the intervening two years to think about the matter. Nor have the people knocking at the doors of the apex court lobbied the government hard enough to make it consider the same. The result is that the general political sympathy that the December 2013 order generated has now evaporated. In the government, while Arun Jaitley says that the Supreme Court should reconsider the ban on gay sex, Venkaiah Naidu says that the government has not yet come to a concrete view on the subject.

Tug of war between legislature and judiciary

Essentially, the matter of decriminalizing gay sex has become a ping-pong ball, with the legislature and the judiciary wanting the other to do the job. If one goes deep into the matter, one can easily see that the hands of the judiciary are tied. They are not lawmakers. If they do so, they are immediately accused of judicial overreach. They just examine the validity of laws as per the constitution. In that, the Supreme Court is firm that Section 377, as it stands now, does not violate constitutional provisions.

The legislature, on the other hand, makes all kinds of right noises in support of the LGBT community, but shies from enacting a law to decriminalize gay sex as it is afraid of the negative reactions from society as surveys have shown that people do not favour it. The BJP is also facing resistance from its core Hindutva constituency. Hence, our lawmakers want to look progressive but they remain regressive. They want the judiciary to do the âhatchetâ job so that they can tell the people that the court has done it and they cannot go against the law.

I am not very enthused by the Supreme Court decision as I am of the opinion that even if the constitutional bench admits the petitions, the arguments will again go along expected lines and the result will be the same. The court will again say that the section does not violate the constitution and will again ask the legislature to delete or amend it. Gay activists and NGOâs will do well to explore other avenues â like lobbying the government and politicians, or even getting a private memberâs bill introduced in parliament and building public opinion â to achieve their end. I know that a private memberâs bill has very little chance of being passed but it will at least show the world the duplicity of Indian lawmakers. A debate in parliament will show who stands where on the issue.