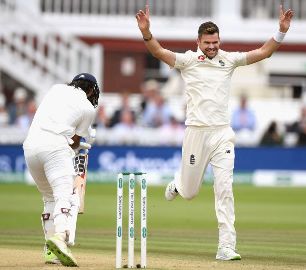 Editor-in-Chief of indiacommentary.com. Current Affairs analyst and political commentator. Writes for a number of publications. View all posts by this Author
Failing in one match can be attributed to a bad day in the office. But failing in two consecutive Test matches cannot be condoned. Indian batsmen have shown a complete lack of application and determination to fold under 250 runs in two innings at Lords. Even their technique has been found wanting. The Indian top order, barring Virat Kohli, has been found chasing the away going ball and nicking it to the wicketkeeper or the slips cordon. At other times, they have cut a sorry picture against the ball which has come in. The old weakness against the moving ball in helpful conditions has been on full and embarrassing display against quality bowlers like James Anderson, Stuart Broad and the newcomer Sam Curran. It has to be remembered that this is the same pitch where Bairstow nearly scored a century and all-rounder Chris Woakes actually did. So the demons were not in the pitch, they were in the minds of the Indian batsmen.

The record centuries and phenomenal averages gathered on the pitches of the sub-continent have no meaning if Test match playing batsmen cannot negotiate the moving ball in England or the bouncing one in Australia. India, if they really want to be considered the number one side in Test cricket, will have to play more matches overseas and win in all conditions. But such is the draw of cricket in India and such are the monetary collections from all sources when matches are played at home that this is not going to change soon. Till then, Indian cricket fans will have to bear with seeing their famed cricketers cut a sorry figure overseas.

It can be argued that England are enjoying the benefits of home conditions and favourable pitches, like India does when it packs its team with spinners and prepares spinner-friendly pitches when matches are played there. But does that really make it a test of cricketing ability? Are international level players expected to be proficient in playing just one kind of bowling or batting on flat pitches? Overseas batsmen are expected to play spin better in India. Likewise, Indian batsmen expected to play the moving or bouncing ball better overseas. A player can truly be called an international player if he can play all types of bowling well on all kinds of surfaces in all Test playing countries. Puffed-up chests at home are of no use if one shows no technique, grit and determination overseas. Abject surrenders, like the one at Lords, put many question marks on the ability of this Indian team.